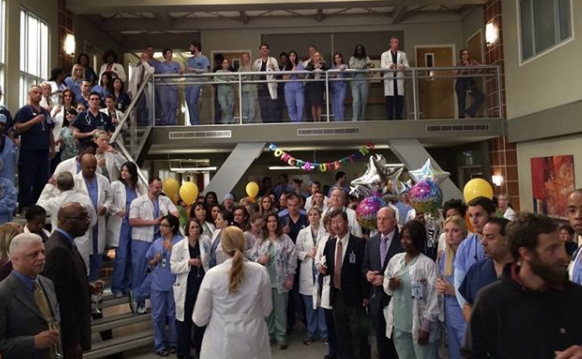 ABC’s biggest medical drama returns very soon. The new season of Grey’s Anatomy kicks off on November 12. Are you excited? When it comes back, we can expect to see all our favorite faces, and a few new ones too.

This season, actress Mackenzie Marsh will have a recurring role. You may remember her for her role as Angela in Will & Grace or Knansie in Charmed. On Grey’s, she will play Val Ashton. According to sources, this new character is, “She’s intelligent, has a fun-loving sense of humor and works in publishing but is extremely lonely.”

In other words, Val will likely hook up with a handsome doctor or two during her time on the show. No one is lonely for long at Grey-Sloan Memorial. What other kinds of colorful characters do you think we can expect this season? Let us know in the comments.

What Exactly Does Grey’s Anatomy Have In Store For Us This Year?

When the new season drops, you can definitely expect to see the Grey-Sloan surgeons in a “war-zone.” It won’t pick up exactly where Season 16 left off. Instead, we will see Dr. Meredith Grey and the others a few weeks into the pandemic, fighting to keep the virus at bay.

Sometimes, we all need saving.

💙 this tweet for a reminder to tune in to the jaw-dropping, 🤯-ing #GreysxStation19 Crossover Premiere Event November 12th starting at 8|7c on ABC. pic.twitter.com/BQqMvES4Rx

“It’s a war zone and we’re the ones on the front line. With all the lives in need, our world is ablaze. What we’re up against now is unlike anything that came before. At times it seems like there’s no end in sight. We won’t stop fighting. We won’t stop feeling. Because sometimes, we all need saving,” Grey’s lead Ellen Pompeo and Station 19 lead Jaina Lee Ortiz narrate together in a joint promo for the new seasons of their shows.

At this point, most fans know Season 17 will tackle the pandemic. However, it wasn’t always like that. Showrunner Krista Vernoff almost passed on that storyline.

“They convinced me that it would be irresponsible to not,” Vernoff told The Hollywood Reporter. “To be kind of the biggest medical show and ignore the biggest medical story of the century felt irresponsible to them to the medical community. These doctors are traumatized. They are not trained or wired to hold the hands of dying people all day who are alone without their families.”

It will definitely be interesting to see what happens on Thursday night. Will you be watching?

You won’t want to miss out on a single second of this action-packed season. Grey’s Anatomy Season 17 premiers at 9 PM eastern time next Thursday on ABC, following the season premiere of Station 19. As you may have guessed, we’re in for another cross-over event. Tune in and see how your favorite surgeons handle the novel Coronavirus pandemic.