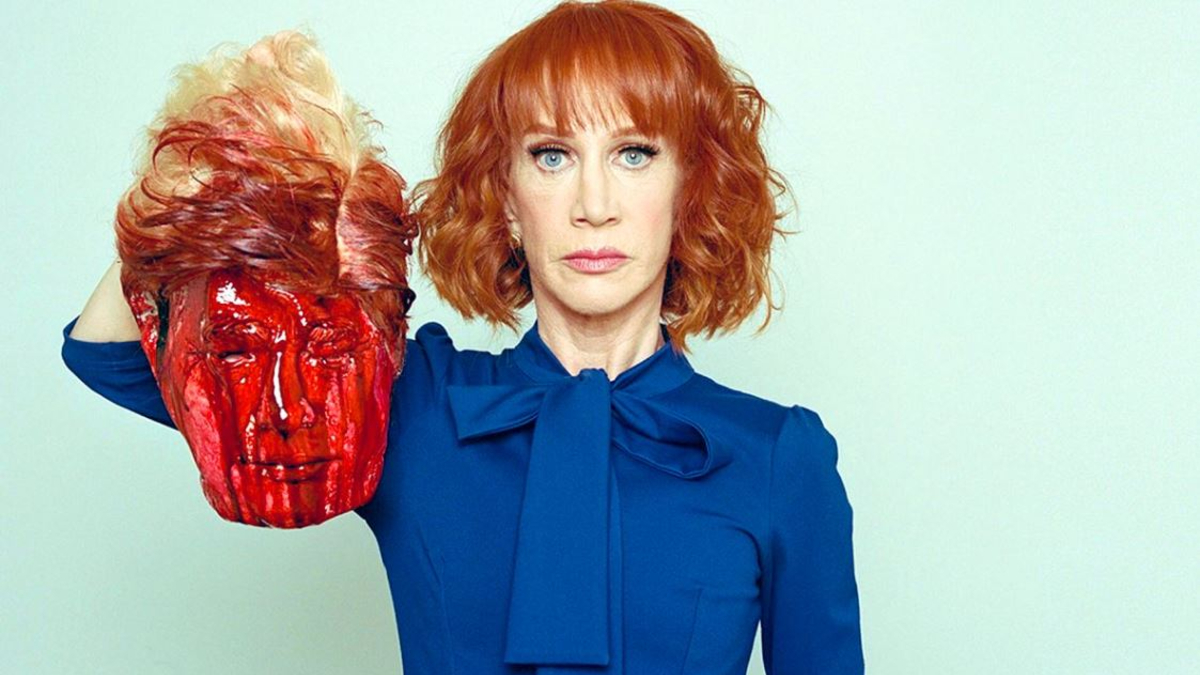 Comic Kathy Griffin is revisiting a controversial tweet from 2017 where she had a photo shoot and for fun, and she was snapped as she held the severed head of what looked to be President Donald J. Trump.

Even her best and closest allies thought the comic went too far. CNN immediately fired her. “CNN has terminated our agreement with Kathy Griffin to appear on our New Year’s Eve program,” the network said in a press statement at the time.

The move lost Kathy a lot or work. Not only that she was axed from CNN, but even pal Anderson Cooper distanced himself. Griffin had served as co-hosted CNN’s annual New Year’s Eve program alongside Anderson Cooper since 2007.

She fell from his orbit for the New Years’ Eve live special as Andy Cohen was hired to replace her.

Griffin also suffered a loss of comedy club and venue bookings, a comic’s life blood for income earning. She has since steadily returned to touring and talk shows.

What did Kathy Griffin do?

Last night during the election tally results, Griffin retweeted the controversial image where she is holding up a bloody severed head, a mock up dummy of President Trump.

Also Tweeting out his disgust at the time, Cooper made it clear he was not on board with Kathy’s decision to show that image.

For the record, I am appalled by the photo shoot Kathy Griffin took part in. It is clearly disgusting and completely inappropriate.

In 2020, Griffin revisits the controversy

In an interview with NPR, Griffin explained to Sam Sanders that it was a “tit for tat” move on her part.

Sanders said: “Griffin said she was mad at Trump for what he said about Megyn Kelly, the former Fox News host, after she grilled him in a presidential debate in 2015…”

Sam Sanders then asked her about the 20 minute shoot that netted the controversial photo. Griffin wanted a photo of a bloody Trump.

In her interview, Griffin said: “I did say, I want to do some kind of a picture to shame Trump…No joke, like, I sent a friend of mine out to, like, a party store or, like, a Halloween store or something. And I said, just bring back anything, like, America/Trump-y (ph).”

Griffin stirs pot once again in 2020

On November 4, 2020, Griffin celebrated her 60th birthday.  Now, Griffin, who described herself as “Mayor of Zero F**Ksville” is active in her Twitter account and reposted the jarring image.

The responses on Twitter are a mixed bag, mostly negative, of opinion over the move.

You didn’t learn the first time you posted this crap, did you?

YES KATHY OWN IT!!! I wish I had half of your outstanding bravery pic.twitter.com/315kH0eNAr