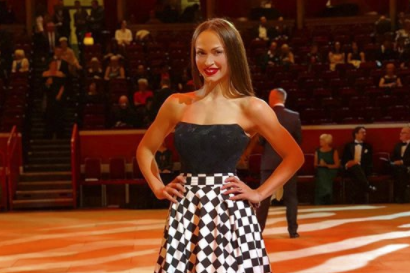 We’re in the middle of a very intense election season. But Dancing With The Stars alum Karina Smirnoff is hoping to share a few smiles. Her son, Theo Gabriel, is just seven months old, but even he can get excited about the right to vote. Karina recently posted her first public photo of the baby boy proudly sporting an “I Voted” sticker.

“My everything! 💖💖💖” the dancer captioned the photo. This will definitely be an adorable photo to share when baby Theo is old enough to cast his own ballot someday. 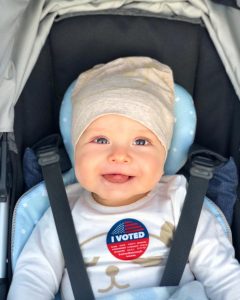 Karina Smirnoff Is So Excited To Be A Mother

Back in April, PEOPLE broke the news Karina gave birth to a baby boy. Shortly after the birth, she moved in with her parents to get some help and support with her new son.

“Karina and baby are healthy and well,” a source close to Karina told the publication. “She’s already head over heels in love.” They added that she’s incredibly excited to embark down the path of motherhood.

She confirmed her pregnancy to PEOPLE back in December 2019.

“I’m super excited to start a new chapter in my life,” the dancer said at the time. “I’ve always wanted to be a mom. I have so many emotions that I’m going through.”

“I’m nervous, excited, over-the-moon happy and overwhelmed,” Karina added. “Everyone has been so great, gracious and has given me so much information. I’m just trying to keep up!”

Baby Theo’s Father Is A Mystery For Now

Karina hasn’t publicly confirmed Theo’s father’s identity. Many fans have varying opinions, but she’s keeping that a secret for now. Most fans can agree, however, that it’s probably not her former DWTS co-star and ex, Maksim Chmerkovskiy.

Back in 2009, Maks and Karina were engaged for nine months. And apparently, it ended rather explosively. Back then, PEOPLE reported they ended their relationship over the possibility of children. Fans hoped they may rekindle their relationship, but it was clear a month later they wouldn’t. Maks said he was “done” with Karina, but his reasoning wasn’t exactly clear. However, this isn’t a huge shock to fans either. Maksim Chmerkovskiy has a reputation for being a “bad boy” and a bit dramatic.

Maks eventually moved on and married another DWTS pro, Peta Murgatroyd. They have a 3-year-old son together. But even so, at the time Peta admitted she thought he was incredibly arrogant and didn’t see herself with him.

Aside from Maksim Chmerkovskiy, Karina has had two other fiances. She was engaged to MLB pitcher Brad Penny and entrepreneur Jason Adelman a few years later. There are some rumors, but no one can confidently say if she is dating anyone right now.

Dancing With The Stars fans miss Karina, but the show still has great ratings even today. If you want to catch an episode this season, tune in to ABC on Monday nights at 8 PM eastern time. The Season 29 competition is really coming down to the wire!