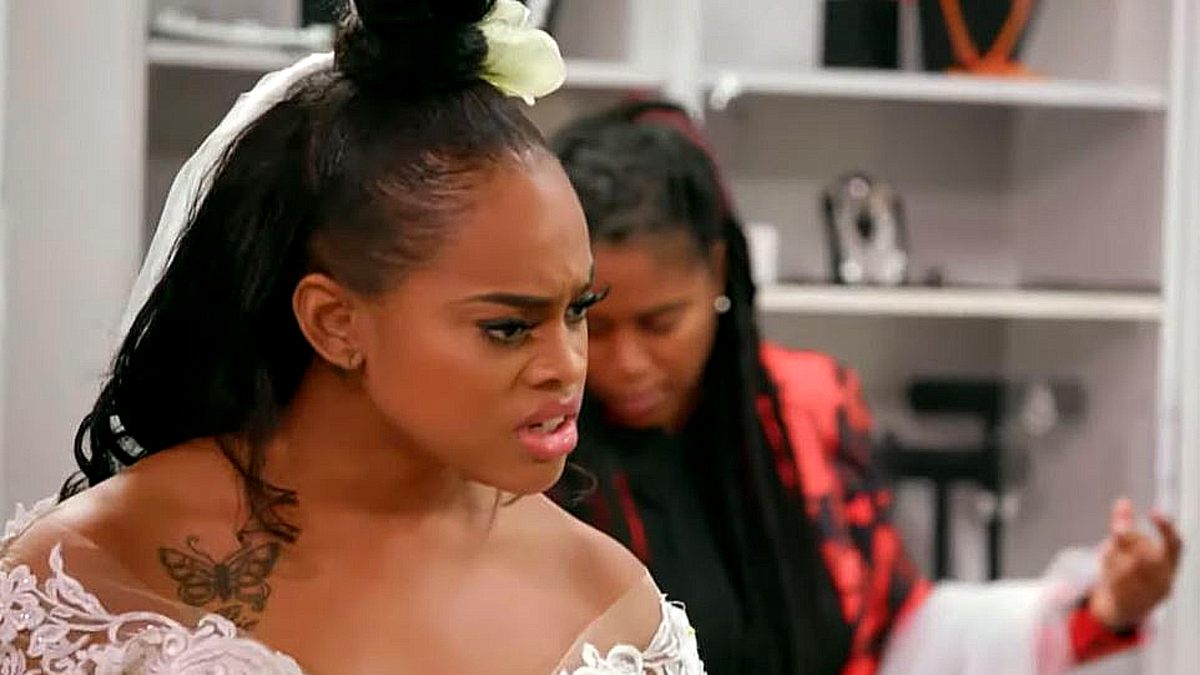 On Thursday night’s episode of Bridezillas on WE tv, lovely self-infatuated bride Alex’s maid of honor still doesn’t have her alterations done. Will she be able to get it done in time?!

Alex is saving herself for her wedding night, but without her father’s approval, she may be waiting much longer than expected.

And also featured on the episode, bridezilla Jessica no longer has control of her wedding and when things come crashing down, her fury is aimed toward her wedding planner.

What happens to Alex in her gown fitting for Bridezillas?

Like a diabolical Greek chorus, Alex’s trio of bridesmaids, Chamira, Amber, and Rashaun, rat out the maid of honor’s laggard ways in not securing a gown for the wedding. They totally let the cat out of the bag. Alex is fuming.

The villain in this Bridezillas TV Shows Ace exclusive preview?

None other than Janyia, Alex’s sister and her maid of honor. Awkward to say the least.

Our clip opens with Alex very pleased everyone is saluting her beauty and she proudly talks about all of her compliments.

Loni sets the shot up perfectly. Alex says: “Thank God everyone is telling me how pretty I look and how beautiful I look, and I believe them.”

Love cannot resist and closes that up with: “So humble. She is gorgeous, though.”

Confronting her three bridesmaids, Alex asks: “Do you all have your dress””

They reply in the affirmative although body language and lack of eye contact may be hiding some truth here.

Then, with visible steam rising, Alex gets very specific. “Do you have your alteration?”

The bridesmaids all move around looking a bit uncomfortable as they reply, ‘yes.’

Then, perhaps in a deflection move, Chamira and Amber let the daggers fly against her sister and maid of honor, the wily Janyia.

The two say she is behind in getting her dress sorted. Alex immediately rings her up and makes it clear this is a make or break moment for anyone in her wedding party.

Noting Amber’s propensity to start messy sh*t, she says: “You have got to be kidding me. There’s no guarantee at this point that they’re going to get done in time for the wedding. I have to call her right now to see what’s going on because maybe Amber has it wrong. Sometimes she starts a lot of mess and drama.”

Alex rings up Janyia. She says: “Hello? Did you get your dress for the wedding?”

Janyia says she did then lays an egg.  She tells her bride sister her alterations are scheduled for Saturday, the day of the actual wedding.

Loni Love has a field day at this point with the reactions from everyone, as Alex drives it home.  She says: “You will be sitting in the audience…that’s utterly ridiculous you’re a maid of honor. You don’t have that dress [or] if it don’t look right you will not be in my wedding. I’m not doing this. I already lost two bridesmaids, what’s one more?”

Not missing a beat, Loni Love for the kill: “Damn, she just demoted her own sister!”

Comedian Loni Love is featured on The Real, and is the narrator voice of Bridezillas. Now in its 13th season, Bridezillas is rocking Loni and her patented brand of snark and deadpan.

Tune in Thursday and see of Alex and her sister patch up things or Alex hires a new maid of honor to look good in her photos: