Is USA Network personality Savannah Chrisley giving off Kardashian vibes? Some of her followers certainly seem to think so. The 23-year-old posted a seriously skimpy snap on Halloween. And, it left a lot of her followers feeling weird. In fact, one follower accused her of trying too hard to be a Kardashian.

The blonde bombshell stuck a superman pose up on her knees with her legs spread. Savannah was posed on a bed with white sheets. Her hands we wrapped around her tiny waist. She had a huge smile on her face as she looked up and off to the side. The young Chrisley looked incredible in a pair of tiny tattered blue daisy dukes. She paired the short, snug bottoms with an equally small white tank top.

Her 2.2 million Instagram followers liked the photo nearly 50,000 times. And, it accumulated just shy of 300 comments. Now, as those who follow her page closely will notice… This isn’t the first time she has shared this sexy snap on Instagram. And, her followers were just as vocal about their dislike of the photo last time as well.

The photo, however, had little to do with Halloween. Savannah Chrisley was just using the sexy snap to draw people in. Why? Well, she was promoting her Sassy By Savannah website.

The skimpy photo was not well-received, accused of being a Kardashian

While some of her followers were here for seeing this sexy side of Savannah, most weren’t. And, they made it crystal clear in the comments of her photo. In fact, one individual suggested she was trying awful hard to act like a Kardashian.

“Don’t become a Kardashian Your a nice Christian girl,” one follower penned in a caption liked nearly a dozen times. This suggested the critical individual was not alone in feeling this way. 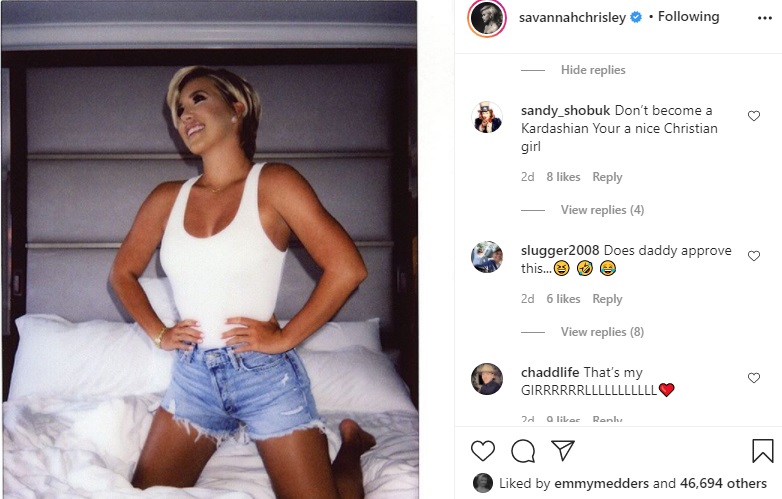 Unsurprisingly, the support did not appear in response to the comment. Savannah Chrisley did have some support in the responses though. One individual could not believe someone compared her to a Kardashian.

Does this picture not make her a nice Christian girl? Give me a break! @savannahchrisley you are beautiful and I wish you nothing but love, light and success!”

Dressing up, flaunting your good looks, and pushing a product is hardly actions exclusive to the Kardashian family. This is something nearly every reality TV star on Instagram does. Do you think Savannah Chrisley is acting like a Kardashian? Or, do you think the individual was being too harsh on her? Share your thoughts with us in the comments.