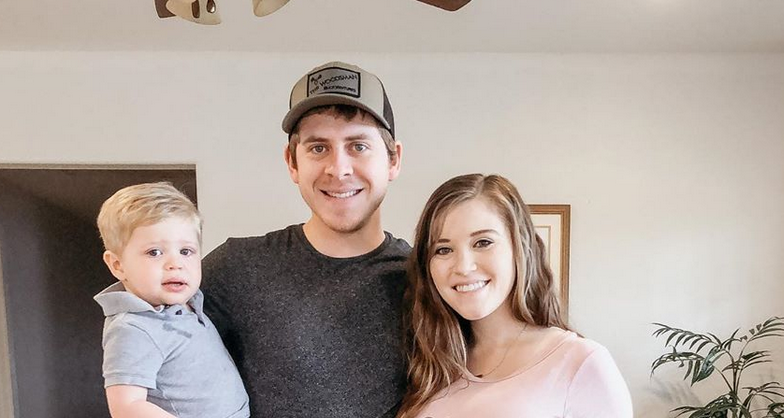 As TV Shows Ace reports, Joy-Anna Duggar Forsyth recently shared new photos of herself and her husband Austin Forsyth. These photos of the Counting On stars were taken shortly after Joy gave birth to their second child.

In the pictures she posted most recently, only Joy and Austin are pictured. Joy writes a heartfelt caption to her husband about her she loves being his companion. Of course, Duggar fans are loving the pictures and thinks the couple looks sweet. They like seeing updates about their relationship.

For some reason, one fan thinks that Joy’s recent post is a hint that Joy is pregnant. Someone commented, “Oh God she’s not pregnant again … ” Right away, Duggar fans backed Joy up and told the first commenter how rude their comment is. Even if Joy was pregnant, fans believe that they shouldn’t ask about it or bring it up.

In response to the comment, Joy wrote, “I have a 9-week-old.”

As fans of the family may know, Joy recently gave birth to her second child with Austin. They now share two-year-old Gideon and two-month-old Evelyn. So, while it’s physically possible for Joy to be pregnant again, she is likely giving her body time to recover. Plus, she and Austin are still adjusting to parenting two young children.

It’s unclear why the commenter mentioned Joy being pregnant. Maybe they thought her sweet message to Austin meant something. Or perhaps they thought that the photo shoot was for a pregnancy announcement. The commenter never responded to Joy’s answer. Nonetheless, since Joy gave birth so recently, it’s unlikely that she’s pregnant.

Not all of the comments on Joy’s post are rude or negative. Most fans are sending their love to the couple, and they hope to see more photos from the photo shoot. Unfortunately, because Joy and Austin are in the public eye, they are not free from of criticism from their followers. Both fans and critics follow the couple on social media, and they sometimes have not-so-nice things to say.

“He just needs a companion.“ Austin’s mom told this to me when we were dating; It’s so true. He just wants to have somebody with him and I love this about him! I’ll be your companion any day, baby.

So, what do you think of Joy’s response? Share your thoughts in the comments section below.

For more Counting On updates, check back with TV Shows Ace.

Mama June Shannon Gets Once-In-A-Lifetime Opportunity
‘General Hospital’ Spoilers, June 11-14, 2021: The Race To Save Chase
‘Outer Banks’ Season 2: When Is It Coming To Netflix?
‘Sister Wives’: Are Kody & Robyn Brown About To Be Homeless?!
Is David Eason Deliberately Fishing For Trolls With New Dog Post?