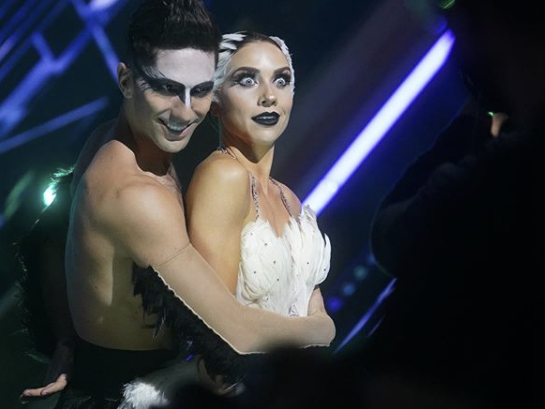 Nev Schulman and his partner Jenna Johnson pulled off the first perfect score of the season on Monday night. But it almost didn’t happen at all. Viewers knew Cheryl Burke took a tumble last week, but not many knew Nev suffered an injury too.

“I was nervous [Monday] man, oof,” the Catfish host told ET. “I fell so hard, like, right at the end. Like flat out, the medic came out, and they didn’t know if I was going to dance. We didn’t make a big thing of it because I was OK, but it was not good.”

“Oh, I thought there was a broken body part for sure,” Jenna chimed in. “We kind of had a rocky start Monday morning and afternoon during dress rehearsal, but Nev is a game-time player. So when I tell you that he was just emoting this Black Swan energy while we were dancing, it was crazy, it was epic.”

Can you imagine how different Monday night’s episode would have gone if Nev and Jenna hadn’t performed?

If you caught the episode, then you heard Nev discuss how important ballet is to him. He and his dad regularly catch the New York City ballet. He actually helped Jenna with some of the choreography this week.

“This was, like, Nev’s baby, OK? I felt immense pressure walking into this week because I know how [much] the ballet world means to him, his family and then this piece specifically,” Jenna told ET. “So I gave Nev the liberty, he always has brilliant ideas for me. He choreographed my beginning first 8 count.”

“It was my little moment to finally use all the ballet knowledge I have,” Nev added.

The performance went over spectacularly. The judges and viewers alike were blown away by the stellar performance. It was easy to see why it earned a perfect 30 out of 30 points.

The Dynamic Duo Take Control Of The Leader Board

Their performance actually pushed Nev Schulman and Jenna Johnson to the top of the leader board, but just barely. They pushed Kaitlyn Bristowe and Artem Chigvintsev out of the top spot, but they will need to work hard if they want to stay there. Nev and Jenna lead by only 3 total points.

Next week, Dancing With The Stars will have a double elimination night. Nev and Jenna haven’t been in the bottom yet, but they will need fans’ votes to help them stay in the competition. If you want to keep them around for another week, you will need to vote. Anything could happen next week.

Catch Dancing With The Stars when it returns Monday night. You won’t want to miss out!