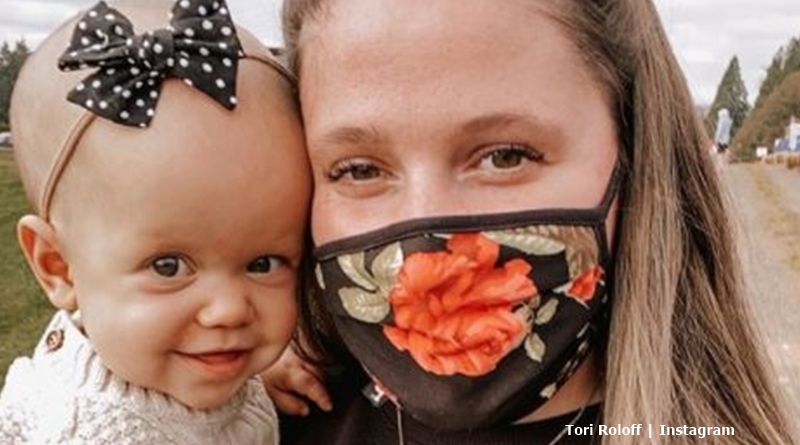 LPBW fans see quite a lot of Lilah Roloff in the latest season of the TLC show. But in real life, she grew a lot bigger. Sitting up by herself now, she looks very cute in the outfits that Tori chooses for her daughter. And, the Halloween costume really took it away for cuteness, Little People, Big World fans agree.

Tori joked about Halloween. In her caption on her Halloween outfits post, she said, “I’m not into Halloween. 🧡🎃🤣.” But clearly, she loved dressing up the two kids. And, she dressed them up as pilots. Her caption noted, “Captain Jackson and his co-pilot Lilah Ray! Ready for take off! ✈️.”  Well, Jackson wore a pilot’s jacket way too big for him. And, in the third photo, the Little People, Big World fan-favorite wore his aviation shades.

Co-pilot Lilah Roloff featured in two of the three photos. In the first one, she sat next to her big brother and smiled at him very sweetly. Her bare little toes stuck out from under her blue tutu-like skirt. And, her top showed she also dressed as a pilot. But, without the jacket. LPBW star Amy Roloff commented, “Stop! This is too much cuteness 💙💗. Love this .”

The second photo of Lilah revealed her looking straight at the camera. Well, with her blue and gold bow on her head and her flight bars on her shoulder, she looked so sweet. One follower wrote, “omg Lilah takes it away for cuteness at Halloween!” But with so much cuteness going around, fans adored both of Matt Roloff’s grandchildren.

One LPBW fan commented, “Oh my goodness, I love these! They are so cute! 😍😍.” But one follower also took it away with perhaps the best comments of all. They wrote, “Hello passengers! We are ready to fly out of 2020!! It may be a bumpy ride ❤️🤣.” Well, hopefully, as the year draws to a close, next year brings something a lot more fun than the coronavirus.

2020 affected everyone. And even Lilah Roloff’s mom, Tori admitted she struggles sometimes. Despite her “privilege” she also feels the uncertainty and stress of the illness. So, no wonder all her followers look forward to a better year in 2021. Tori might not realize just how much the photos of her two gorgeous kids help people right now. In fact, over the long pull, many fans of LPBW thanked Tori for sharing her life.

Jackson and Lilah Roloff brought a lot of sweet moments into an otherwise grim world. And, the Halloween outfit certainly added more smiles to the faces of people facing an uncertain future.