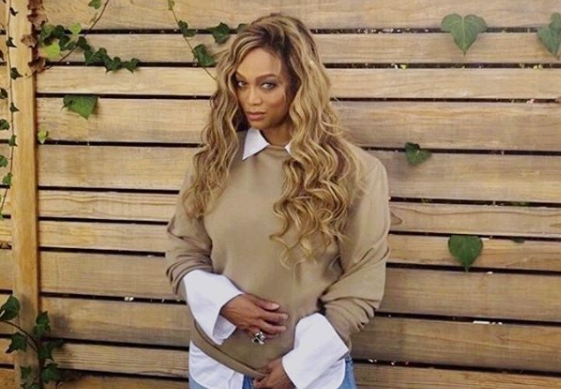 By now, you probably heard about the feud between Dancing With The Stars hostess and executive producer Tyra Banks and the Real Housewives crew. According to inside sources, Tyra does not want any Housewives to compete on the show in future seasons. The source alleged that Tyra doesn’t think the Housewives have any star power and that she only wants headline-making celebrities from now on.

And as you can imagine, this did not sit well with anyone. Real Housewives fans trashed Tyra Banks in comment sections online. Even RHONY star Bethenny Frankel addressed the situation on Twitter.

“Good to know @tyrabanks has clumped me in her no more housewives mandate on @DancingABC Also good to know- their casting director Deena, who I ❤ has asked me to be on that show multiple x in the last decade. I’m also no longer a housewife, but nobody is bigger than the game Tyra,” Frankel said in a now-deleted tweet. She later said she took down the tweet out of respect for a DWTS staff member.

Now, Tyra Banks wants to set the record straight. She recently sat down with ET to address the rumors.

Tyra Banks Denies She Ever Banned The Real Housewives From DWTS

“It’s just dumb rumors, and they are going to continue,” Tyra said. Since she took over hosting duties this season, many people have expressed negative opinions about her online. It seems like rumors regularly fly about the new hostess, whether they have any backing or not.

“I don’t know what’s happening. I don’t even understand,” she told ET. “You know what, there are some people out there who are just trying to stir stuff up.”

According to Tyra, she doesn’t have anything to do with casting choices. However, it is worth noting that she is an executive producer, so her opinions likely pull some weight. Tyra went on to say that she believes someone is spreading rumors to make her look bad.

“There will be another rumor next and another one. After a while, I’m just going to be like, ‘I just can’t even answer this crap anymore,'” she said. “There’s somebody that’s hating. Somebody that’s mad there are changes on Dancing With the Stars so they are making stuff up.”

She told ET she thinks she knows who is behind the rumors, but hasn’t called them out yet. She also wishes Bethenny Frankel would have come to her directly instead of adding fuel to the fire on Twitter.

What do you think? Is someone making up rumors about Tyra Banks? Or do you think there is some truth to the situation? Let us know what you think in the comments.