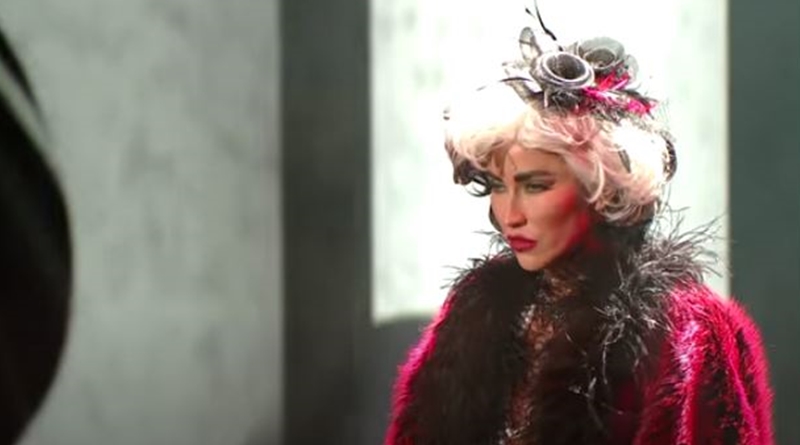 DWTS fans saw that last week, Kaitlyn Bristowe really seemed worried about her performance. It came after she confessed she took a tumble. But, she managed just fine. Then this week, after looking more confident, she faced the possibility of getting sent home. And fans sound furious with the Dancing with the Stars judges.

We reported that last week, after feeling so fearful, Kaitlyn and Artem managed the “80s themed Samba to Justin Bieber’s Sorry” energetically. Many fans encouraged her, suggesting she just give it her best and hope for the best. But most of all, they hoped she relaxes more and enjoys her time on Dancing with the Stars. But on October 26, she started off so well. However, it nearly ended in a disaster. Taking on the role of the fierce Cruella, she looked magnificent, fans agreed. But, the judges disagreed on her performance.

So far, a 10 evaded Kaitlyn, though she scored nine’s in previous performances. She seemed determined that this time, a 10 came her way. Fans saw them dance, and loved it. But DWTS judges Carrie Ann Inaba and Bruno Tonioli seemed unimpressed. Thankfully, Derek Hough said that they carried it off quite well, noting, “good job.” And, many fans of the ABC show agreed with him.

Carrie and Bruno described Kaitlyn and Artem’s dance as “rushed.” And, Meaww noted that Carrie seemed very critical when she said, “Kaitlyn needs to work on holding her shape well while dancing and even said that the latest dance wasn’t a great performance.” So, when it came to scores, Kaitlyn dropped and they only got 24 points. That dropped them right at the bottom of the lowest two. In fact, they nearly got sent home thanks to Carrie’s  7 score.

On Twitter, furious fans slammed Carrie as acting biased against the former Bachelorette. And if not for the public, Kaitlyn might have ended her hopes for the Mirror Ball Trophy. DWTS fans said much more on social media. One loyal fan wrote, “Peta, Sharna, Emma AND Lindsay all were shocked that Carrie Ann gave Kaitlyn a 7…..smh!” And, another person commented, “How did Kaitlyn score lower than Chrishell?? CAI was way off base. Artem did some nice choreography too.”

Why is Carrie Ann so hard I’m Kaitlyn? A 7 was basically a slap in the face for how awesome she did! Just got to keep voting to make up for that crap. #DWTS #DancingWiththeStars @kaitlynbristowe

More fans slam the judging on Dancing with the Stars

One fan alleged that Carrie Ann simply hates on Kaitlyn. They commented, “You’re telling me that N*LLY did better than @kaitlynbristowe ??? That she did just barely better than M*nica??? @carrieanninaba has it out for Kaitlyn and it’s annoying. Giving her a 7???? It wasn’t perfect but it wasn’t a SEVEN. smdh stay strong girl #dwts.”

And, another angry DWTS fan commented, “Wow, a 7 from carrie Ann for Kaitlyn. I’m speechless!! She needs to get her eyes checked!! A low score can actually send someone home this season because the scores are so close, and not usually so this early on!! No way this was a 7!” And, a few people think Carrie just scores low on Artem because he dumped her.

It's obvious you have an issue with Kaitlyn. Your poker face sucks lady! Watching you critiquing her, not hard to see you dislike her for whatever reason??Your comment "Another not good dance." was uncalled for. Stop picking on Kaitlyn! #dwts carrie ann

Watch Kaitlyn’s performance in the video below.

Leave your comments if you think Kaitlyn deserved a 7 from DWTS judge Carrie Ann.