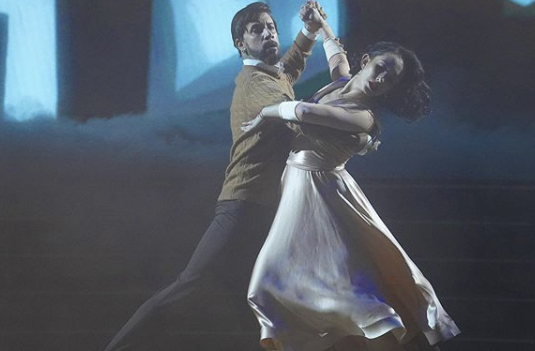 If you tuned in to Dancing With The Stars last night, you probably remember Cheryl Burke’s accident. During rehearsals with AJ McLean, she slipped and smacked her head right on the floor. Thankfully, they were still able to perform.

“Thank God for the ballroom floor, that it’s a real ballroom floor with springs underneath it. Because my head was like a basketball,” Cheryl told ET. “First it was my right buttcheck that landed. Thank God I have a little cushion back there. Then I was trying to stop my neck. Basically, if I would just have released my neck it would have been no bueno.”

Cheryl also addressed the accident on Instagram. She posted a series of photos with the caption,

“Yesterday, I took a hard fall while rehearsing for #VillainsNight. 🤦🏽‍♀️ Even though AJ kills me at the end of this Tango, this wasn’t part of the routine. It’s one of those things that can happen in a split second. Thankfully, I have the best partner I could ask for that was there to pick me up off the ground.”

Thankfully, the performance went well — without any more spills. AJ and Cheryl earned 26 points for their Tango to “Psycho” by Intermezzo Orchestra. If you hadn’t already guessed, their theme for Villains Night was Psycho.

Everyone is glad that Cheryl is okay, but some fans noticed that it’s a little ironic. Just recently, Cheryl appeared on The Kelly Clarkson Show to talk about all the partners she accidentally injured over the years.

“I wouldn’t take full responsibility, but I am definitely taking some. Ray Lewis was my partner last season. First football player to ever get injured, my fault,” Cheryl said during her appearance. “Then we had Tom Delay. I danced with, fractured both his feet. Cristián de la Fuente—I broke his arm live on television when we did the samba and at the very end we had this dip and I feel my head just crash to the dance floor. And Tom Bergeron at the time had to cut to commercial because he broke his arm.”

Thankfully, nothing happened on live television. Cheryl and AJ performed well and made it through the elimination round. They will be back to compete next week. It’s a double elimination night, so make sure to vote for your favorite dancers.

Dancing With The Stars returns for an all new episode on Monday night at 8 PM eastern time on ABC. Will you be watching? Cheryl Burke and AJ McLean need your votes to stay in the competition! Let us know who you want to win in the comments. We’re curious to know what you think.