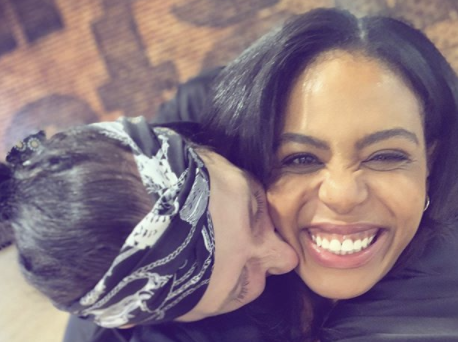 Last week on Dancing With The Stars, jaws dropped when Tyra Banks announced the bottom two. Johnny Weir and Britt Stewart are definitely a power couple. But, somehow that didn’t keep them out of the bottom. Ultimately, the judges saved them and eliminated Peta Murgatroyd and Vernon Davis instead. Britt Stewart recently opened up about her feelings regarding the situation and teased some fun surprises for tonight’s episode.

“We were proud of our performance, but unfortunately, were disappointed by the judges’ scoring,” the pro said about last week’s performance. “Although I disagreed with the scoring of our salsa, I ultimately always respect the feedback and critiques from the judges, and use it moving forward into the next week.”

For Villains Night, Britt and Johnny will tackle the Viennese Waltz with costumes inspired by Dracula. This style proved to be difficult for Carole Baskin, but Nelly pulled it off quite well. Nevertheless, fans believe Johnny Weir will be able to handle it.

Britt commented that this style seems to be more comfortable with Johnny’s talents. She says the movements are more graceful and are more like skating.

“Each week, Johnny has been progressing and growing so much. He has been exceeding my expectations and I want to continue to share him and his journey with our audience. I admire Johnny. He dares to be different, and is always his unique and authentic self in his performance, interviews and costuming. I do my best to showcase that in our choreography.” Britt said about her partner.

Johnny Returns To His Roots

A few weeks ago, Britt Stewart reported her celebrity partner was having trouble in the rehearsal room. To break him out of his funk that week, she took him to the skating rink. After a fun afternoon on the ice, Johnny bounced back and they had an amazing performance. They earned 29 out of 30 points for their contemporary routine — the most anyone has earned in a single night this season.

Perhaps a return to the ice will enhance their future performances.

Fans are sure that Villains Night will be incredible. All week, the contestants teased costumes on Instagram and Twitter. If you haven’t seen any previews yet, now is your chance to get caught up before the new episode airs tonight.

Tonight on #DWTS, it's a haunt you can't miss. 🕸 It's #VillainsNight is at 8|7c on ABC! pic.twitter.com/KKgIUDq34A

Dancing With The Stars returns for Villains Night tonight at 8 PM eastern time on ABC. If you can’t wait to see Britt Stewart and Johnny Weir perform, be sure to tune in. And don’t forget — your votes keep them in the competition. Who do you think will go home tonight? Leave your opinions in the comments.

Too Much Heat? Lindsie Chrisley Takes A Break From Social Media
‘Bachelor In Paradise’ Spoilers: Reality Steve Reveals Five Early Couples & Status
Could There Be A TLC Birth Special For Jessa Seewald’s Fourth Baby?
See Pictures Of Josh & Anna Duggar Like You’ve Never Seen Them Before
‘LPBW’: Why Tori Roloff Doesn’t Clap Back At Mom-Shamers