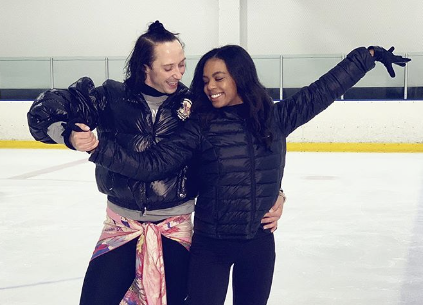 Johnny Weir wasn’t exactly having his best week behind the scenes of Dancing With The Stars. His pro partner Britt Stewart claimed he was struggling, and a bloopers video seemed to confirm that. The video features a mashup of all the randomness that went on in the rehearsal room, and Johnny Weir fell flat on his behind during a kick.

“Are you ok @johnnygweir? 😆 Bloopers and other behind the scenes moments from the past week of rehearsals! #DWTS #80sNight,” the show captioned its video

“I know how to fall. Bambi in the ballroom,” Johnny replied in the comment section.

Johnny Weir Returns To The Ice

To break him out of his funk, Britt took Johnny to a local ice rink.

“The roles were reversed today! I feel very special getting to be on the ice with @johnnygweir ❄️⛸❤️ P.S. Bless Johnny for being patient with me and pulling me around on the ice!” she wrote.

The roles were reversed today! I feel very special getting to be on the ice with @johnnygweir ❄️⛸❤️ P.S. Bless Johnny for being patient with me and pulling me around on the ice!

It certainly seemed like a day on the ice was just what Johnny needed. After getting off to a bumpy start during rehearsals, he and Britt performed quite well during last night’s episode.

If you didn’t get a chance to tune in, you can do that here:

Johnny and Britt pulled off a nearly flawless contemporary routine to Bonnie Tyler’s “Total Eclipse of the Heart.” And by nearly flawless, we mean they were one point shy of a perfect score. The couple received 10s from both Derek Hough and Carrie Ann Inaba. Bruno Tonioli gave them a 9.

“Connecting, projecting, emoting. What you’re doing now, which is the sign of an artist, you really give dance a meaning,” Tonioli said. “We always know that you have great extension, elevation. You can feel the space but not just with the moves, with the emotion. A tiny, tiny, I know it’s a picky little thing. Use a little bit of the contraction. A little bit more, you know what I’m talking about.”

Could They Take Home The Mirrorball Trophy This Year?

A 29 out of 30 is definitely nothing to sneeze at. It was the highest score of the night and the closest anyone has come to earning a perfect 30. But fans still expressed their anger at the judge’s remarks on social media.

In the past, Johnny claimed that the judges are harder on him because of his Olympic background. But even so, he doesn’t believe he has any special advantages. After all, figure skating and ballroom dancing aren’t the same.

Do you agree? Do you think Bruno would have given the routine a 10 if it belonged to someone else? Let us know what you think.

If you love Johnny Weir and Britt, make sure to keep voting for them. They’re in third place right now, but they continue to improve each week. Fans know they have a real shot at the Mirrorball Trophy. Stay tuned for more!

Tyler Cameron Dishes On New ‘BiP’ Hosts
Duggar Kids Preparing For End Of ‘Counting On?’ Looks That Way
Danielle Busby Has Mixed Feelings As She Leaves Blayke Behind?
‘Days Of Our Lives’ Two Week Ahead Spoilers: Xander Goes Too Far With Dr. Synder – Sets Up Another Salem WhoDunnit
‘Manifest’ Season 1 & 2 Drop Into The Netflix Library