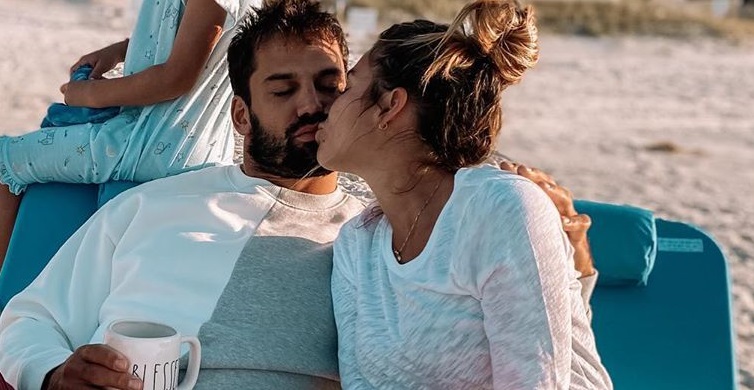 Redneck Island alum Jessie James Decker set Instagram on fire in a racy snap with her husband Eric. The sexy photo featuring the country pop singer-songwriter and her husband on the beach accumulated over 150,000 likes in just a few hours.

Jessie James Decker and her husband enjoyed a lovely Saturday together

The reality TV personality hoped her 3.3 million Instagram followers were having a wonderful Saturday. And, it certainly looked like she and her husband, former NFL wide receiver Eric Decker, had a nice evening.

The photo of the duo looked like something ripped from a scene of a romance movie. They posed on the beach where the edge of the water met the sand. The background was a grey color as the day was clearly coming to an end.

Clothing wise, the duo didn’t look like they were on the beach to go for a swim. Perhaps, they were just enjoying a romantic stroll. Eric Decker sported a pair of chocolate brown athleticwear bottoms. The former NFL player didn’t have a shirt on which allowed him to flaunt his muscular physique for his beautiful wife.

Both of his hands were flat with his palms on the wet sand behind him as he supported his weight as well as some of his wife’s. He had one knee bent toward the sky. His other leg was flat and resting on the wet sandy beach. Both he and Jessie James Decker were barefoot.

Now, Jessie positioned herself facing her chiseled husband as she straddled him. Jessie James Decker thrusted her body forward and pressed her voluptuously bosom right into her husband’s face. Both of her hands were holding the back of his head. Her fingers entangled in his short hair. She pulled his head into her bosom. She threw her head back with her face toward the sky. Her mouth gaping wide and her eyes shut tight.

Her followers were here for the romantic photo.

Outside of her husband not wearing a shirt, there wasn’t a ton of skin being revealed in this otherwise suggestive snap. In fact, most of her followers agreed it oozed poor of a goofy and playful vibe. Especially after reading the caption.

“When he motorboats me, it just shows me how much he really cares,” Jessie James Decker penned.

When he motorboats me, it just shows me how much he really cares #happysaturdaynighteveryone

And, her followers? Well, over 150,000 of them liked the photo inside of four hours. And, the photo accumulated over 1,200 comments as well. Here’s what some of them had to say.

“Built for speed and comfort,” her husband Eric playfully added to the comment section. His comment was liked nearly 1,200 times.