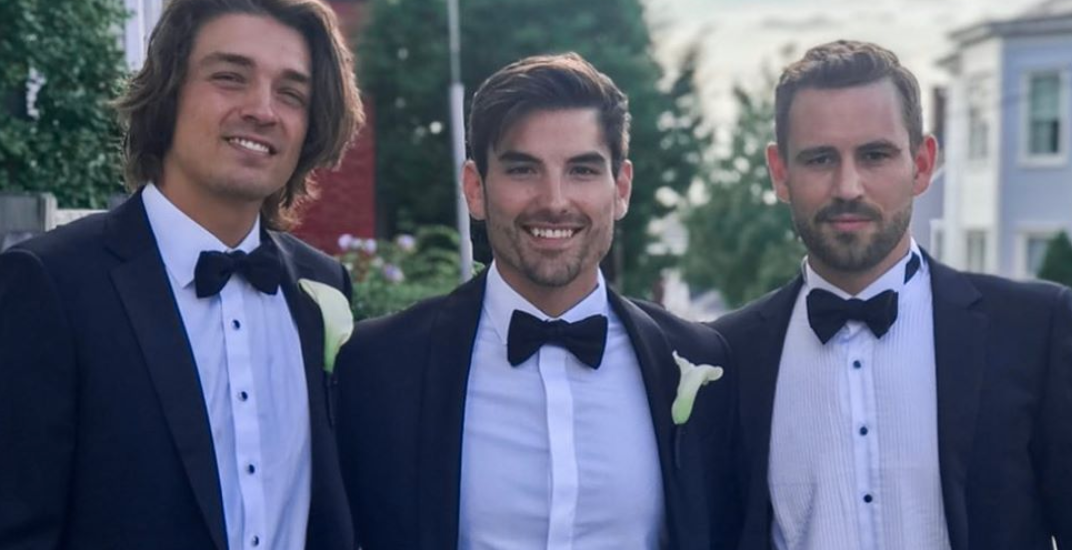 On The Bachelorette, Clare Crawley said that she never went to prom in high school because no one asked her. This created some drama because a fan accused her of lying. Now, Nick Viall and Chris Harrison are getting in on the prom drama.

Clare Crawley has had all sorts of drama when it comes to what she said about going to prom. According to Us Weekly, Nick Viall jumped in on the drama by posting a picture of himself with Dean Unglert and captioned it: “Also not Prom.”

Chris Harrison was quick to jump in and add to the joke.

“Not true my husband went to prom with the guy on the left,” Chris comments. “I have pictures to prove it.”

It didn’t end there though, Nick continued the joke by commenting back to Chris. He said that he was cheating on him.

“It’s was homecoming and he cheated on him with me.”

Dean even got in on the fun saying: “always be my homecoming king.”

So for starters, this all happened when Clare said that she had never been to prom on an episode of The Bachelorette. Then, a fan jumped in to prove her wrong and accuse her of lying. The fan even had a photo of Clare at prom.

“I didn’t have the greatest high school experience either, to be honest. I never went to prom,” Clare said. “Nobody ever asked me. Nobody even knew who I was in high school. I was just invisible, I think. I felt invisible.”

Apparently, the fan actually said that Clare went with her current husband to prom.

“My husband took @clarecrawley to senior prom, @clarecrawley you went to prom,” the fan said, including a photo. “#bachelorette #clarecrawley #senior ball #1999 #hothusband,” she continued.

Clare was pretty sassy in response though because turns out, it was another dance she went to.

“You do know there is more dances in high school that are NOT prom?” she reveals. “Turns out it’s just someone digging up old photos. (Why she keeps her husband’s old dance pics I’m not sure). I went to a new school senior year and in fact DID NOT go to prom just like I said.”

The person who said that Clare was at prom was quick to take back what she said and clear up the error.

“Clare did not go to prom with my husband. It was another dance and I apologize for my error.”

Did you watch last week’s episode of The Bachelorette? What did you think of the episode? Let us know in the comments below. Come back to TV Shows Ace for more news on your favorite Bachelor Nation stars.

THAT’S A WRAP! ‘LPBW’ Filming Complete: Is The TLC Series Finished?
‘You, Me & My Ex’ Coming To TLC: Here’s What We Know So Far
Ashley Snowden Says People Are Cruel, Lack Critical Thinking Skills
‘LPBW’ Wait! Is Molly Roloff Headed Back To The Show?
Astrid Loch Bump Watch, ‘The Bachelor’ Star Is Popping