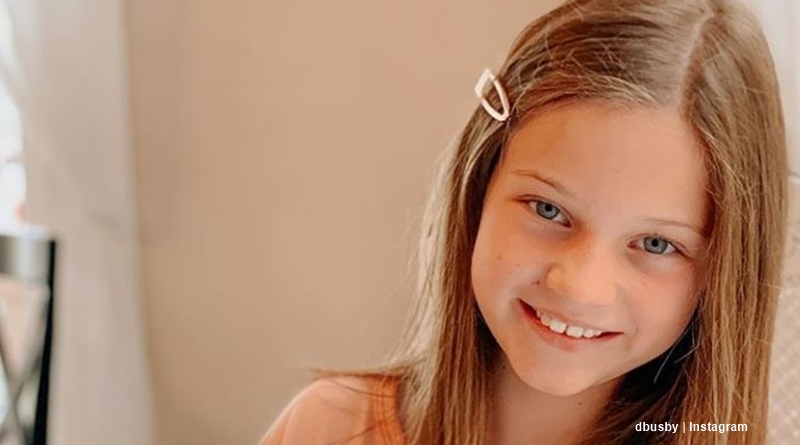 Interested in getting to know a little more about Blayke Busby? Fortunately, Adam and Danielle recently shared some fun information with their fans!

Adam and Danielle Busby uploaded their Busbys Back To School Q&A on their YouTube channel a few weeks ago. Today, they published a blog post on their website encouraging their fans to go check out the video. What was the video exactly? Well, it is a compilation of sitting the girls down and asking them a series of questions. It is something Adam Busby does every year. And, they always ask the girls the same round of questions. The video even features clips of how the girls answered the questions last year vs how they answered them this year.

Turns out, Blayke Busby’s favorite TV show isn’t actually something you watch on TV. During the fun video on their YouTube channel, Blayke reveals that her favorite TV show is actually a Netflix Original. Her response to the question was a little funny because one of their Amazon Alexa devices must’ve been somewhere in the background. Blayke tried to say the name of her favorite show and the device heard her so “Alexa.” So, it chimed in asking how it could help.

Blayke let out an adorable laugh. Adam could be heard chuckling in the background as he told the device to turn off. Then, Blayke repeated her answer to the question. This time it could actually be heard.

So, what show does Blayke Busby consider to be her favorite? She likes a show on Netflix called Alexa & Katie.

Lifelong best friends Alexa Mendoza and Katie Cooper are anticipating the start of their freshman year of high school. They confront a crisis that leaves them feeling like outsiders at a time when what seems to matter most is fitting in.”

Alexa & Katie currently has four seasons on Netflix. It tells the story of two girls who have been lifelong friends trying to survive high school. The series is mostly a comedy. But, it does get emotional as Alexa is currently going through cancer treatment.

If you haven’t watched this Netflix Original that Blayke Busby has coined as her favorite show… It is certainly worth checking out!

Watch the video below

If you want to see Blayke Busby and her sisters answer the back to school questions yourself, you can press play on the video below. The girls answer an assortment of fun questions! To date, the video has been viewed over 660,000 times.

So have you see Blayke Busby’s favorite TV show yet? Or, are you going to check it out?

‘Love After Lockup’ Spoilers: Why Was Courtney Arrested?
‘Deadliest Catch’ Captain Keith Colburn: How Is He After Battling Covid?
Adam Busby’s Birthday Wish Granted: Finally Gets His Hummer
Josh Duggar Preaching In Prison Might Not Work Out So Well This Time
‘KUWTK’ Sneak Peek, Khloe Kardashian Gets Heated Over Kourtney’s Love Life