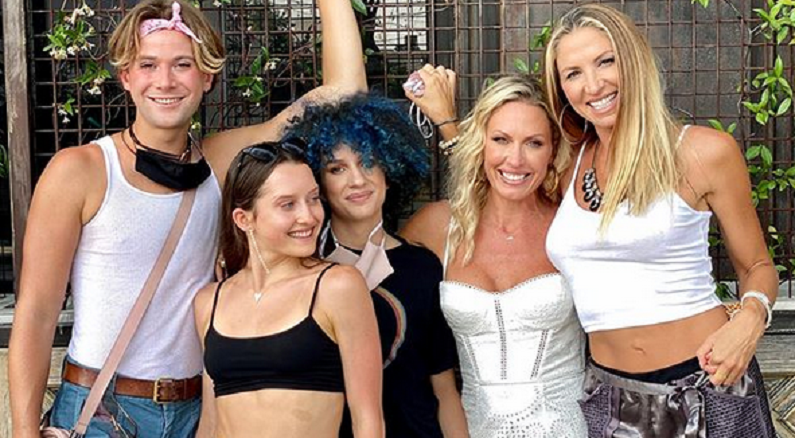 Braunwyn Windham-Burke is sharing more details about her “modern marriage.” Her and her husband Sean Burke are currently living separately. The couple shares seven children. The RHOC star revealed how their kids feel about their marriage.

Braunwyn and Sean are currently navigating their new normal. Last month, rumors swirled that the couple was considering a divorce. The rumors started when Braunwyn held a Zoom meeting about co-parenting and divorce. That same month, one of their children posted an Instagram photo with the caption: “F***. You. Mom.”

So, how Braunwyn and Sean’s children handling it?

Braunwyn Windham-Burke previously revealed that her husband Sean Burke moved out of their family home in Orange County. Recently, the 42-year-old sat down for an exclusive interview with Us Weekly. She claims that Sean is still there for their children. The only difference is that he sleeps in another house.

The couple wed in 2000. They have seven children – Bella, 20, Rowan, 18, Jacob, 15, 7-year-old twins Caden and Curren, Koa, 5, and Hazel, 2. Rowan was the one who reacted to their “modern marriage” on social media. Braunwyn said that their “little kids” don’t understand their parents’ new situation. But the older children are certainly aware as to what’s going on.

“If anything, their dad is spending more quality time with them,” Braunwyn explained. “The older kids, they’re fine with this because Rowan wants, you know, a little space right now, too. It’s important for her. So, she likes it.”

Join us for our next mental health session as we talk about addiction and recovery! Link in Bio ❤️ #mentalhealthawareness #amplifiedvoices #onedayatatime #recovery #soberissexy

“Bella is 20, she’s working three jobs right now to move out with her boyfriend,” the reality star continued. “She’s ready to do her own life, but he’s happy that we’re happy, and Jacob’s like, ‘Whatever, like, I love you. You’re happy. Do you.'”

Previously, Braunwyn revealed that she’s seeing someone “special” outside of her marriage. But she wouldn’t reveal who that person is. Also, the couple has no plans to divorce. She also added that both she and Sean are in therapy.

Braunwyn Windham-Burke is navigating her sexuality

The Bravo star has been discovering new things about herself. During a separate interview with Access Hollywood on Tuesday, October 20, Braunwyn Windham-Burke revealed that is “coming to terms with different parts” of her sexuality.

“Right now I’m protective of this – I’m not blasting it out everywhere – but there’s definitely parts of me that I quelched with alcohol and I never really admitted to myself,” Braunwyn said.

She’s currently giving herself “the time and the grace” to figure herself. The free-spirit wants to live her life as authentically as possible. But she admits that “there’s a lot more things about me that I never gave myself the ability to really look into.”

The couple wants to “redefine what marriage means to us.” While they no longer live under the same roof, Braunwyn told Access Hollywood that they will remain married. As for whether they will reunite soon, she would rather focus on the present moment.