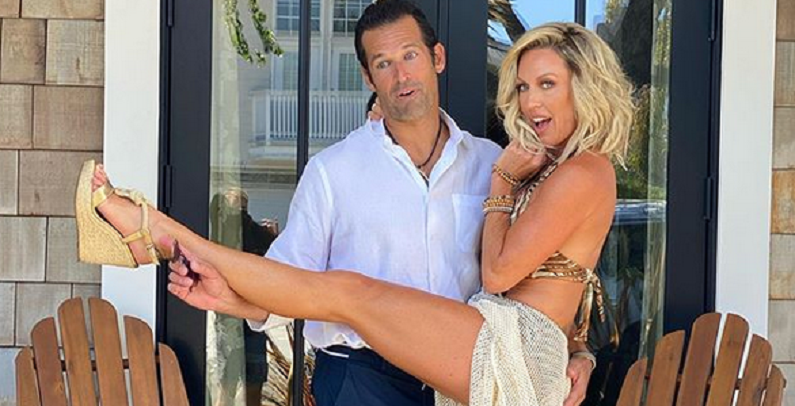 Braunwyn Windham-Burke is seeing someone “special.” This comes after the RHOC star revealed that she and her husband Sean Burke are living in separate homes. The couple is currently navigating their marriage. She previously talked about their “modern marriage” on social media.

On The Real Housewives of Orange County Season 15 premiere, Braunwyn made a shocking admission. She revealed that she’s a recovering alcoholic. And it looks like this season will document her struggles. These days, Braunwyn is opening up about her unconventional marriage to Sean Burke.

The couple has an open relationship. Braunwyn revealed that she’s been seeing someone new.

Who is Braunwyn Windham-Burke dating?

The 42-year-old spoke exclusively to Us Weekly on Tuesday, October 20. She shared the details of their modern marriage. The RHOC star admitted that she’s seeing someone “special” who isn’t her husband. But Braunwyn wouldn’t reveal who it is.

“There’s someone in my life right now that makes me happy and I smile just thinking about, but I kinda want to protect it right now,” Braunwyn told Us Weekly. “I’m not quite ready to put it all out there, everyone in my life that knows me knows what’s happening. I don’t think I’ve smiled so much. It’s good. I know if you look at social media, it seems really crazy, but things are really good in our house right now.”

Rumors swirled about Braunwyn and Sean’s marriage last month. They first started when she hosted a Zoom seminar about co-parenting and divorce. While she recently revealed that they are currently living in separate homes, Braunwyn claims that they have no plans to divorce.

A post shared by Braunwyn Windham-Burke (@braunwynwindhamburke) on Oct 5, 2020 at 2:33pm PDT

“I’m not going to worry about the future until it happens,” she explained. “I love Sean. Sean loves me. We have every intention of staying together. We are very honest in our communication. There are just some things that I discovered about myself that I wanna explore a little more and he’s very supportive.”

Braunwyn said that Sean is very understanding. She wants to live a “very authentic life” that she’s never given herself permission to do before. Now that she’s turned 42, she wants to uncover those parts of herself that she’s “pushed down” and live her life “authentically.”

Despite what the fans may think, Braunwyn Windham-Burke made it clear that she and Sean Burke have “every intention” of “growing old” and raising their seven children together. The couple agreed to live separately during this time. Braunwyn revealed they made the conscious decision to focus on themselves.

“There’s just a lot of stuff going on in our lives and it’s better for us to not live in the same house right now,” Braunwyn said. “And to give you some space, we’re both working on ourselves, we’re both in therapy. I want to be the best version of myself, so does he, we have been together 26 years. We’re not throwing that away. You know, we are family. He’s my best friend.”

While the two are “living in two homes – we want to stay married.” But she admits it will be this way “forever.” But she wants to focus on the present moment. Braunwyn and Sean first spoke out about their unconventional relationship on Season 14 of RHOC. The couple briefly separated before and had threesomes after his 35th birthday.