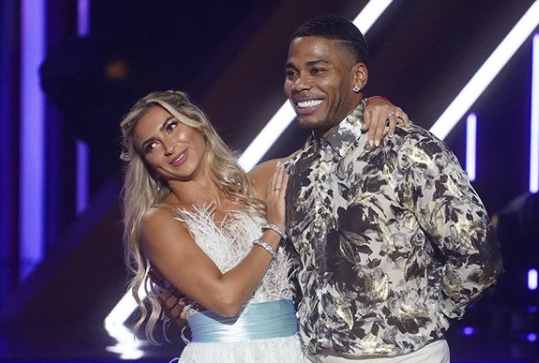 Anyone who moves as much as Dancing With The Stars contestants are bound to lose a few pounds here and there. Nelly recently spoke to Us Weekly about exactly how much weight he’s lost over the past several weeks.

He also adds that lifting his partner, Daniella Karagach, during rehearsals is a workout too.

“You’re twisting and you’re turning and you’re hurting in new places that you never thought but it’s cool,” Nelly said. “It’s a lot of cardio!”

Nelly And Daniella Earned The Judges’ Praises Again This Week

All that hard work is definitely paying off. For the second week in a row, Nelly and Daniella earned a total score of 28 points. Their Viennese Waltz to Tim McGraw’s “Humble and Kind” wowed the judges last night.

“There is something so beautiful happening,” Carrie Ann Inaba said of their performance. If you haven’t had a chance to watch it yet, you can do that here:

All I can say is @nelly YOU DID THAT 👏🏼👏🏼👏🏼 MASSIVE THANK YOU to all our friends, family, and FANS!!!! Thank you for voting and keeping us in the competition. I’m super excited to show you guys what we have in store for VILLAINS NIGHT 😈💜 @dancingabc #dwts

It’s really clear that Nelly and Daniella are improving week after week. Could they earn their first 9s next week? Perhaps even a 10? You’ll have to stay tuned to find out.

The Two Actually Get Along Quite Well, Despite Viewer Rumors

Last night, Nelly and Daniella were the first couple saved from elimination. They hugged and ran off stage together, hand in hand. Beforehand, DWTS viewers noticed that the couple rarely showed affection towards one another and wondered if they got along well.

But if you follow either of them on social media, you can clearly see that they adore each other. Daniella frequently adds behind the scenes videos on her Instagram stories. In a recent Instagram Q&A with fans, Daniella said that she will be really sad when Nelly isn’t her partner anymore.

If you want to keep Nelly and Daniella in the competition, you will have to vote. Viewers decide the bottom two contestants, and the judges handle things from there. It’s clear this couple has a lot of room to grow, so make sure to give them your votes!

Dancing With The Stars will be back with a brand new episode Monday night on ABC. Be sure to tune in at 8 PM eastern time to see who will be the next to go home. Who are you rooting for? Be sure to let us know in the comments.

Joy-Anna Forsyth Under Fire For ‘Reckless’ Mistake [Video]
Does Colton Underwood Have A Boyfriend? (No, Not The Plant)
Courtney Waldrop Admits Her Family Needs A Few More Members
Colton Underwood’s Nana Helps Him Find Love On Tinder – Did She Swipe Right?
‘OutDaughtered’ Adam Busby Shares His Secret Ticket To The Gun Show