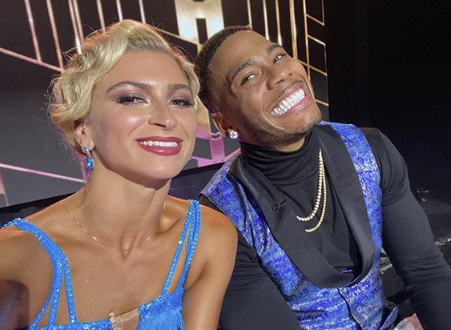 Nelly doesn’t exactly come off as the most affectionate person. Fans quickly noticed that other DWTS contestants happily hug and hold hands with their partners during the elimination portion. But Nelly and Daniella Karagach rarely have any interaction at all during this emotionally charged point of the show.

The rapper wants to set the record straight — he and Daniella get along great. He recently posted a photo of the two and it looked like they were about to head into rehearsal.

Some fans suggested the two may be an item, but that definitely isn’t so. Nelly is in a relationship with Shantel Jackson, and Daniella is married to another pro dancer, Pasha Pashkov. You probably remember Pasha as Carole Baskin’s partner this season.

Nelly may not be the most experienced dancer on the floor, but it’s clear that Daniella is helping him quite a bit. The rapper was critical of judges’ comments earlier in the season. Even though he and Daniella continue to improve week after week, he didn’t feel like they got the recognition they deserved.

Nelly opened up to judges and revealed that he grew up poor in St. Louis and there just weren’t any opportunities for ballroom dancing. This is the first time he’s ever tried ballroom and feels that the judges are grading him too harshly — especially since Daniella is giving it her all.

“As far as my technique, that’s in this young lady’s lap, and when those judges don’t see that, I get offended because I’m taking up for her. I don’t care about me, but she’s put in the work and they shouldn’t be doing that to her,” Nelly said after their week 2 performance.

Neither Nelly nor Daniella have posted much about the upcoming episode, but it’s 80s Night and everyone is excited to see what comes next.

The couple will Samba to “Rhythm of the Night” by DeBarge. Samba requires a lot of bounce and rhythm, so hopefully Nelly can bring it. We know Daniella can help get him to the level he needs to be.

Make sure to tune in to Dancing With The Stars this week. You won’t want to miss out. Everyone’s favorite ballroom competition returns to ABC on Monday night at 8 PM. Let us know what you think after you watch!

‘RHUGT’: Vicki Gunvalson Reveals Which Cast Member Almost Caused Her To Table Flip
Claire Duggar Pregnant?! Speculation Picks Up, Here’s Why
Jon Gosselin Hospitalized From Poisonous Spider Bite
John Hersey Defends The Timing Of His Relationship With Katie Thurston
Blake Moynes Dishes On Rumors He Could Be ‘The Bachelor’