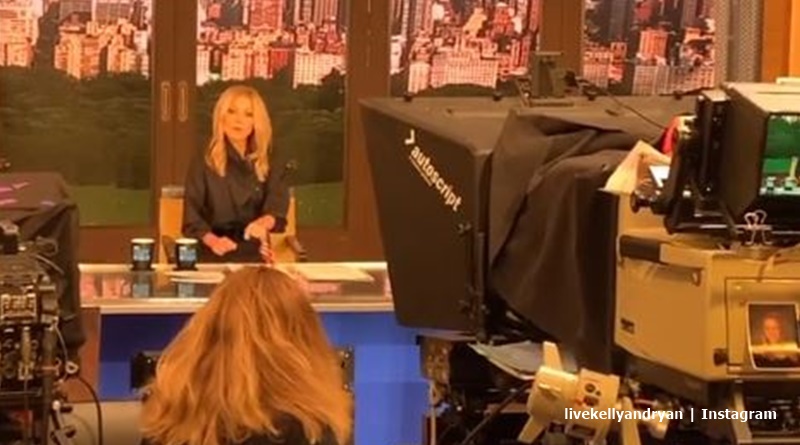 LIVE With Kelly and Ryan started filming in the studio again recently. So far, Ryan Seacrest’s been there. Even though he looked a bit startled as Kelly cut it a bit fine modeling her Gucci outfit until seconds before screen time last week. But this week, Ryan took the day off and Kelly hosted very professionally without him fans think.

Both Kelly and Ryan Seacrest garnered loads of fans who thoroughly enjoy the show. And, they seem delighted that the show now films back in the studio. Recently, Kelly became the face of Fashion before and during filming. So lately, Fans saw a range of expensive outfits. But, one of them amused fans hugely as it seemed a bit out of season. We reported that despite the price of her Gucci shirt, it looked like “Christmas wrapping paper.” But, apart from that, they hardly ever stack up too many critics.

The Blast reported that on Monday, though, that fans seemed a bit concerned as Ryan Seacrest didn’t appear. Kelly shared about it on Instagram on the main page for the LIVE With Kelly and Ryan show. Fans wondered how Kelly would cope by herself. After all, she dealt with a live interview with “Roseanne star Sara Gilbert.” They discussed “the newest season of ABC’s hit sitcom, The Conners.” And, she managed very well many fans agree. Not only with that, but with all the other intricacies of such a popular live show.

On the post about Ryan’s absence, the caption read, “Live now! Ryan took the day off.” While one or two trolls liked the idea of a solo host, a lot of others expressed concern about Ryan. After all, in 2020, sudden disappearances might mean someone contracted COVID-19. One follower wrote, ” Hope Ryan’s OK. 2020 sucks.” And one fan who missed him said, “Not the same without Ryan 😢.

Other LIVE With Kelly and Ryan fans wondered if he’s sick after he took a flu shot recently. Feeling strong emotions, one fan talked about it. They commented, “I told everyone THAT RYAN SHOULD NOT HAVE GOTTEN THAT FLU SHOT. AND LOOK …….NOW HES SICK!!!!!!!!.” However, no reports of illness crop up anywhere. And over on his Instagram, he talked about traveling for American Idol auditions. So hopefully, that explains his absence from the show on Monday morning.

A post shared by LIVE with Kelly and Ryan (@livekellyandryan)

On Air with Ryan Seacrest

It seems Ryan might not ail in health as he featured in On Air With Ryan Seacrest. And, his quote for the day said “No matter how attractive a person’s potential may be, you have to date their reality.” Plus, about a week ago, Ryan posted up on his Instagram about American Idol. He wrote, “The road to Hollywood is 6ft longer this season. Let the search begin…again! #TheNextIdol.”

Maybe Ryan’s just busy rather than sick. And anyway, lots of fans agreed that Kelly Ripa managed quite fine going solo on LIVE With Kelly and Ryan.