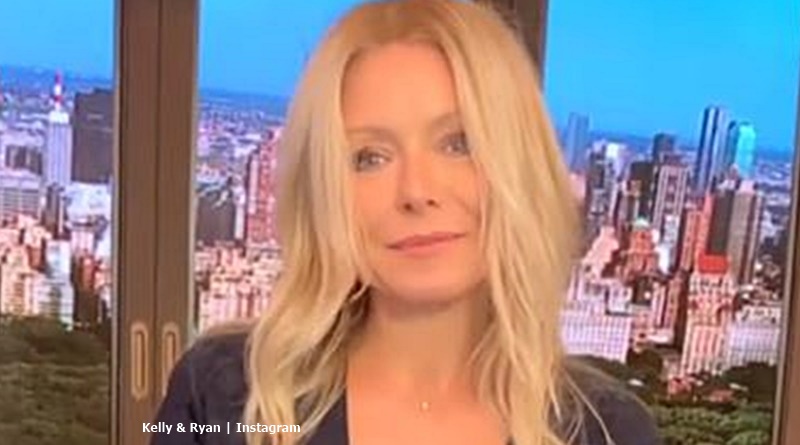 Kelly Ripa just proved that wearing a designer label and very expensive outfits doesn’t necessarily make for an attractive appearance. Her many fans took issue with her outfit on October 16 in a video she shared on Live! with Kelly & Ryan. Usually complimentary, this time fans didn’t know whether to laugh or cry when they saw her ensemble. And many of them agreed that her pricey shirt looked like Christmas present wrapping.

Kelly Ripa – slim but not a good Gucci look

We reported that lately, Kelly’s fans worry about her weight. She looks very slim, but some people feel she could use a bit more flesh on her small frame. Sometimes she claims she hardly eats at all. And yet, fans also know that she enjoys her food. And in her recent video, she revealed herself eyeing some snacks. Actually, Kelly seemed delighted that she found some lightly salted chips. She said, “I can eat it.” And, she noted that she eats “all the time.”

Anyway, she dawdled around the food until seconds before Live! With Kelly & Ryan aired. The Blast noted that Kelly Ripa looked “stylishly outfitted in head-to-toe Gucci.” She worse “tight black pants, heels, plus a red-and-green patterned shirt.” But, the shirt really caught the attention of her fans. And, not in a complimentary way. Some fans hated that she wore clothes most people can’t afford. But, others wouldn’t wear the shirt even if it came from Target.

With Christmas over two months away, fans picked up on the rather out-of-season colors. In various patterns and shade of greens, whites, and orange, people thought it looked a bit odd. One fan sarcastically wrote, “Didn’t know Christmas shirts were out already 🌲.” And, another one commented, “the pattern of the blouse fabric is lovely, but I am not really loving the color combo. Its different and interesting for the holidays. Maybe a rusty, ivory and browns color combo would be better?”

A post shared by LIVE with Kelly and Ryan (@livekellyandryan)

However, one Kelly Ripa fan spoke a bit more kindly to her. They wrote, “…when you walked out on stage to my husband…said that you looked like you were ready for Christmas. It’s not a bad thing It just means it’s a cute top You always look cute💜 have a good weekend and hopefully we’ll see you on Monday…we love watching you Kelly and Ryan💜💙❤️.”

What did you think of the Gucci shirt that Kelly Ripa wore? Do you agree it looks like Christmas wrapping paper? Sound off in the comments below.