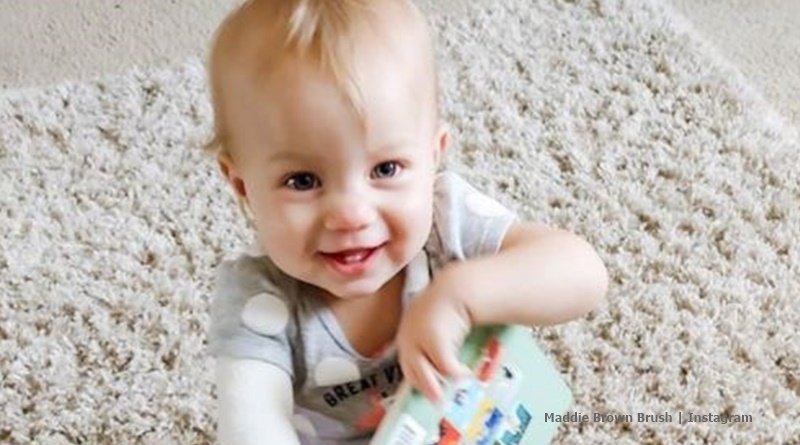 Sister Wives star Maddie Brown Brush told fans that on her daughter Evie’s first birthday that she underwent her first surgical procedure for her FATCO syndrome. Some fans criticized her for taking such a drastic step. But, she explained it would help her daughter get a better quality of life. Now, in a new update, fans see that the little girl went for a mold fitting for a prosthesis.

We reported that Maddie and Caleb knew right from the birth of their second child that one day, corrective surgery would be needed. But some fans wondered why. After all, she seemed able to toddle around in a fashion. So, many of her fans slammed Maddie for it. But, Maddie explained that it involved surgery that kept her ankle and part of her foot. And, it means that with a prosthesis fitted, she’ll get around a lot easier.

Since then, Maddie shared a few photos of Evie wearing her cast on her stump. Even that upset some fans. Some of them think that calling it a stump is a bit too abrasive. But, Maddie and Caleb seem like realists. Call it what you like, they made some difficult choices for their daughter. And, with or without less realistic terms, she faces lifelong challenges. But despite critics, many fans love the way the Sister Wives couple handled it all.

Fitting for the prosthesis

Recently, Maddie Brown shared on Instagram Stories, that Evie went for her “first molding” of the prosthesis. Over on Reddit, many fans spoke about how much they admired Maddie and Caleb. One fan noted, “I have always liked Maddie and Caleb, but learning about what they’ve been going through and how they’ve chosen to handle it is making me respect them so much.” Next, they talked about the trolling they get over the stump and amputation.

They noted, “it can’t be easy to put yourself at risk for cyber bullying, and it’s important to share this kind of information.” After all. it normalizes “bodily differences and potentially raise[s] awareness and funding for research.” So, very very nicely, they hope that the Sister Wives couple gets “the support that they need.” The fan hopes people rather extend kindness to them.

Support for Maddie and Caleb

Other fans of the TLC show agreed that they admire how Maddie and Caleb promote FATCO syndrome. The genetic rarity isn’t all that well understood, after all. A Sister Wives fan noted, “God I cannot imagine how difficult it must have to be to go through surgery with a baby. It’s already so terrifying to have a healthy baby, and then going through recovery with somebody who can’t even understand what’s going on? I don’t pray but they’ve got a prayer from me coming.”