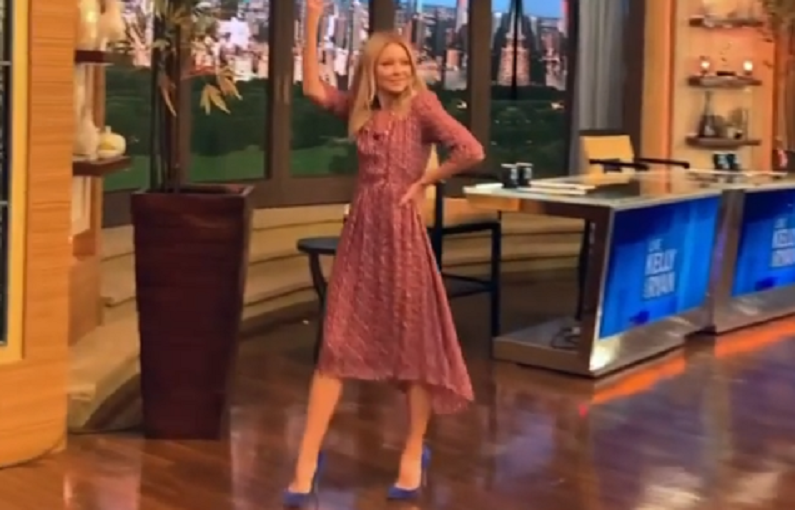 Kelly Ripa has fans concerned about her weight. The 50-year-old was told she needed a sandwich while sharing her backstage video. While the actress is known for her petite size, some feel there’s something wrong. Kelly often posts videos using the hashtag #KellysFashionFinder.

The videos showcase her stylish looks and designer outfits. The videos are uploaded to the official Live Instagram on an almost daily basis. Wednesday’s video showed Kelly revealing her jumpsuit is no longer “baggy.” Obviously, it sparked concerns with her weight.

Read on to learn more about the video and fan reaction.

Daytime host says her clothes are no longer “baggy” anymore

On Wednesday, October 14, Kelly Ripa appeared in a video showing off one of her daily looks. The All My Children alum wore a gray jumpsuit from Mayle. Clearly, Kelly looks incredible since turning the big 5-0. She accessorized her casual look with a pair of green Gianvitto Rossi stilettos.

“It’s old,” Kelly said before adding, “Um, it used to be very baggy, but I washed in the washing machine. I did.”

Followers reacted to Kelly’s concerning video. Many focused on her small frame. Some of them think she’s too small.

“How in the world do you stay so skinny….do you never eat??” one fan asked.

“Very baggy? You must be a minus 0,” a second follower added. An online troll told Kelly that she needs to eat a “sandwich.” Several comments claimed that the former soap star looked “too thin.” However, not all of the comments were bad. One fan wrote that Kelly looked “very cute” in the jumpsuit.

Kelly Ripa opened up about her diet before

“I eat like a porridge, if you will,” she said.

When it comes to lunch, Kelly has a “microgreens” salad.

Kelly is on the alkaline diet, which means she only eats alkaline foods, instead of acidic foods, to maintain the pH levels in her body. According to Everyday Health, the alkaline diet is a gluten-free and vegan diet that includes fruits, vegetables, legumes, seeds, nuts, and the occasional glass of wine. But Kelly quit alcohol three years ago.

While the alkaline diet doesn’t contribute to weight loss, it could given the approved list of foods. But it hasn’t been scientifically proven to maintain the alkaline pH in your body. While Kelly’s diet includes plenty of healthy foods, there is no evidence based on this theory. No amount of food is going to change or alter the pH levels in the body.