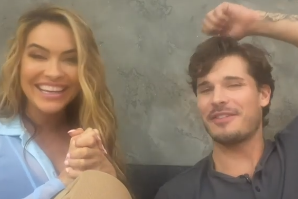 It’s been almost a year since Chrishell Stause’s divorce. And it sounds like she’s ready to dive back into the dating pool. As soon as Dancing With The Stars is over, that is.

“I’m not dating. I’m really busy — I’m trying to work on my cha-chas and my contemporaries,” the Selling Sunset star said on the Tamron Hall Show. “It’s something I’m looking forward to as soon as [DWTS] is over, but hopefully people will vote so it won’t be right away. I’m going to venture out once I’m done with this. You know, Tamron, what it really is — I’m just waiting to get my dancer body on and then I’m gonna be like, ‘OK, I’m ready!’”

#TeamSellingIt is getting ready for what they say is their hardest week yet. Catch up with them right here! #DWTS @chrishell.stause @glebsavchenkoofficial

Her ex-husband Justin Hartley certainly hasn’t wasted any time. He’s dating The Young and the Restless star, Sofia Pernas. Chrishell recently opened up to PEOPLE about her feelings on the matter.

“I feel like anybody would be heartbroken to see how quickly or easily you are replaced; of course that’s going to sting,” she said at the time.

Justin Hartley famously asked Chrishell for a divorce via text message. To add to the pain, Chrishell also lost both her parents over the past two years. She’s going through an incredibly difficult season in her life, but she’s trying her best to make the most of things. She even recently froze her eggs in case she does meet Mr. Right down the road.

“It’s been almost a year, so I’m excited to get back out there. I’m a hopeless romantic, so I think it can still happen,” said Chrishell. “It’s 2020, maybe you could meet your person through an Instagram DM. I don’t know. Crazier things have happened! I’m very happy, I’m in such a great place and I’m so grateful for everything. I’m exactly where I’m supposed to be.”

What’s Next For The Selling Sunset Star?

Some fans suggested that Chrishell would be an excellent addition to The Bachelorette, but she isn’t sure that’s in the cards for her.

“As far as another ABC dating show… a girl’s just trying to make something work, so let’s not put any more pressure on it than needs to be. I don’t think that would be the right avenue for me,” she told Entertainment Tonight at the time. But who knows? She can always change her mind. .=

If you love watching Chrishell and her partner Gleb on the dance floor, make sure to tune in and vote. The viewers ultimately decide who will be in the bottom two each week. Chrishell and Gleb are currently at the bottom of the leader board, so the judges may not choose to save them if they do end up in the bottom. Be sure to vote and keep them safe!

Dancing With The Stars returns to ABC on Monday night at 8 PM eastern time. Don’t miss a single episode.