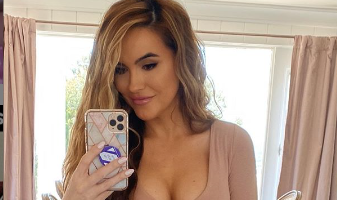 Fans of Selling Sunset already knew Chrishell Stause and Justin Hartley had split up. But, in the new episode of the show’s third season, she gave a little more insight into what happened. The reality show on Netflix follows a group of high-end real estate agents as they navigate relationships and million dollar commissions.

While Hartley hasn’t addressed the split publicly, Stause said on the show he ended their relationship with a text message. He texted her forty five minutes before the divorce filing he submitted went public. Fans came after the This Is Us star in support of Stause, but so far they only have her side of the story.

What Was Chrishell Stause’s Responses To Fans Slamming Justin?

One Twitter user posted a GIF of Kris Jenner holding a gun. They mentioned Justin texting her to break the divorce news. Chrishell Stause responded with a GIF of Jordan Peele sweating. She posted, “me trying to keep it classy and not like your tweet.”

Another twitter user said, “Chrishell didn’t deserve the fake snow assaulting her, ok? Justin ended their marriage over a text and she still came to support her bully’s wedding…while dying on the inside.” They posted her crying at Davina’s wedding and she responded with skeleton emojis.

This is a @hairbybradleyleake appreciation post! Thank you for all the safety precautions taken & for bringing me back to my hair happy place! Go to his page for details. You are the BEST 🙌🏽💗👑

Chrishell Stause is grateful for fan’s support according to ET. She said, “I so appreciate all the love you guys have given for #SellingSunset.” But, she also addressed concerns about fans lashing out at Justin. She said, “some of you are attacking a certain person defending me. I appreciate the sentiment because certain things made me mad too. But I hate feeling like someone is getting bullied.”

She went on to say, “Want to help empower women and if my tweet has any say at all I just hope you can keep the passion but maybe minus the vitriol? Love you guys SO much though and LOVE your enthusiasm.” Stause didn’t want fans going after Hartley or her co-star Davina.

Stause has always maintained that the filing of divorce by Hartley in November 2019 was a complete surprise. He even listed their separation date in July when they were still together in public. The third season of her show she only had a few weeks left to film when the news broke. Chrishell and Justin’s friends also felt blind-sided. A source said friends were also surprised and thought maybe it was something done on impulse by Justin. They thought the two might work it out.

You can continue to watch all three seasons of Selling Sunset on Netflix, it’s a great binge when you’re looking for drama, heartbreak, and gorgeous houses.