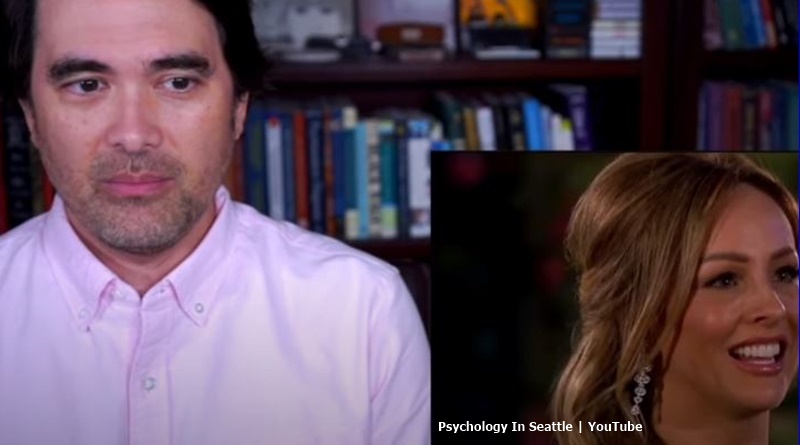 If you never heard of Kirk Honda before, we reported that he’s “a professional couples therapist who brings insight into [reality TV] characters.” And, he’s not a TV devotee, so he brings a fresh and professional perspective. And, he’s racked up an impressive resume if you check it out at Antioch University. He’s described as being “Core Faculty, Couple and Family Therapy,” at the “School of Applied Psychology, Counseling and Family Therapy.”

Clearly, Dr. Kirk never previously knew Care Crawley and he never watched The Bachelorette before either. Careful to always assure fans he doesn’t treat these people, he steps back and assesses what they say, how they say it, and he looks at body language.

Interestingly, he didn’t like Clare’s second constant that she met during the premiere. Jay turned him off with his straight jacket as he ridiculed those with mental health issues.

A joke perhaps, but “cheap joke” in poor taste, Kirk felt. And fans agreed. One wrote, on Twitter, “bro f-ck jay. mental illness is f–king real and not a joke.”

Dale Moss – Dr. Kirk picks up on the instant chemistry

If you don’t watch Dr, Kirk, you might not know that he doesn’t go and read up on spoilers. So, he more than likely never knew that Clare Crawley later stopped filming and claimed she fell in love with Dale Moss very fast. So, it seemed quite impressive that he locked in on Dale immediately. Introduced as the third contestant, Kirk discussed it as he watched it go down.

The Bachelorette contestant, Dale made no idiot of himself with fancy costumes. Dr. Kirk noted that Clare displayed a “physiological reaction to Dale.” He picked up straight away that she maybe “feels like she just met the one.” He likened it to “love at first sight.” And to the skeptics, he explained that “love is a magical thing,” and it “happens.” And, “scientists try” and predict or “quantify it,” but they never fully understood it. But for Clare, she just “had that electric moment.”

Interesting comment about what if she decided then and there?

Not knowing the outcome of Clare, it’s interesting that Dr. Kirk wondered what happens if, in the first moments of the show, a lead decides they found the one for them. He wondered how she could go through a whole season dealing with all those men. In fact, he wondered if it ever happened on the show before, where a contestant felt everyone should go home and stop wasting her time.

However, he cautioned that in past, Clare said she always felt attracted to “the jerks.”  So, he suggested that there might just be an element of her own expectations in her instant assessment of Dale Moss. But, her body language definitely reveals a signal that her “mate just crossed her path,” and she probably feels inside, “go for it.”

And later, when The Bachelorette lead told Chris Harrison she thinks she met her future husband, Kirk suggested the ABC producers felt unhappy with the result. Well, as it turned out they sure weren’t happy with it at all.

Check back with us often to discover Dr. Kirk’s take on Tayshia’s part in The Bachelorette.