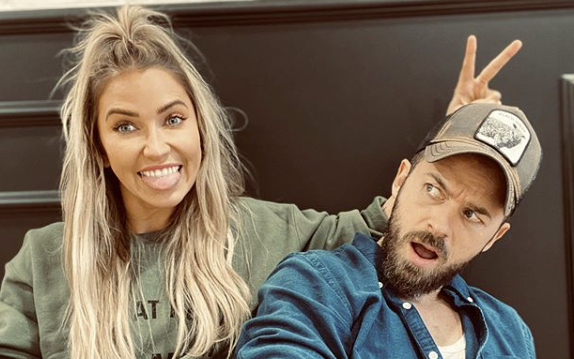 “When it doubt, lunge it out. I cannot take Artem serious in this wig . 😂 What’s your fav thing about the 80’s? Mine was the fashion. Scrunchies. Duh. So excited for you guys to see this tango…. AND…. We have a little surprise at the end! #80s #Dwts #willyouacceptthisdance,” Kaitlyn captured the photo.

“Omg I die for this look on Artem,” Peta commented. Chrishell Stause left a serious of laughing emojis.

“I need to see Nikki’s reaction to this look on Artem,” one fan said. Artem is engaged to Total Bellas star, Nikki Bella. She and their infant son, Matteo, are cheering him on from home this year.

When it doubt, lunge it out. I cannot take Artem serious in this wig . 😂 What’s your fav thing about the 80’s? Mine was the fashion. Scrunchies. Duh. So excited for you guys to see this tango…. AND…. We have a little surprise at the end! #80s #Dwts #willyouacceptthisdance

Kaitlyn And Artem Top The Leaderboard, But Will They Stay There?

Right now, Artem and Kaitlyn are leading the pack. This week they will dance the Tango to “I Think We’re Alone Now” by Tiffany. The couple consistently performs well and receives top scores. But will they manage to keep their first place title? Many other contestants are rapidly improving too.

Catfish host Nev Schulman and Jenna Johnson are in second place and could easily take the top spot if Kaitlyn and Artem slip up. Other competitors like Chrishell Stause and Gleb Savchenko drastically improve week after week and have a shot at the title too.

Nevertheless, Kaitlyn and Artem are prepared to bring it on.

“They’ve seen me do the elegant flowy stuff,” Kaitlyn said in an interview with ET after last week’s episode. “So I think they just wanna see [something] a little bit more upbeat. Which we’re definitely going to bring next week!”

Kaitlyn Bristowe has many years of dance behind her. Fans are certain that’s helping her in the competition. Even though she hasn’t danced professionally in several years, she seems comfortable and in her element.

“I think I have a bit of a disadvantage because I have to unlearn so much of like classically trained ballet moves that come to play when I try to practice,” Kaitlyn said before the competition began. Since then, she’s practiced religiously and it seems to pay off.

Are you excited for 80s night? Don’t forget to tune in to ABC at 8 PM so you don’t miss a thing. Will you be rooting for Kaitlyn and Artem? If so, you have to vote. Let us know what you think of the season so far.