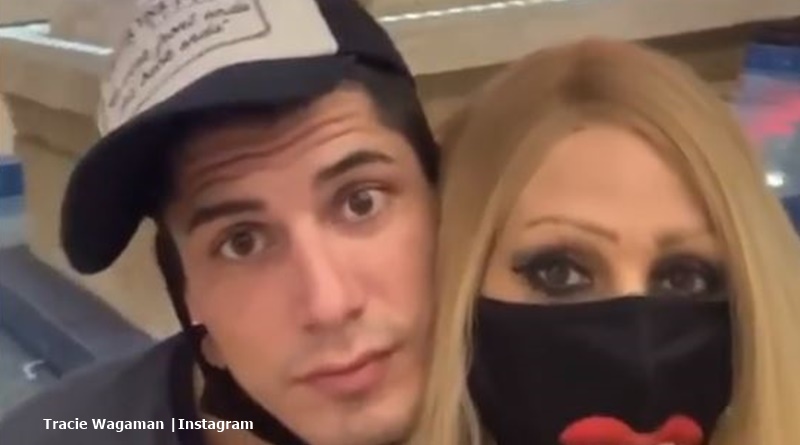 Love After Lockup fans heard that Tracie Wagaman and Clint split and await the outcome of their divorce. In the meantime, she moved to Las Vegas. Loving the lifestyle, she often shares about it on Instagram. Now, fans think she might date a younger man.

We reported that Tracie told her followers in mid-July about Vegas. At the time, she confirmed that she and Clint still await the completion of their divorce proceedings. The move came soon after she won some money at an Albuquerque casino. So far, she didn’t win very much by all accounts. But, she makes a living with her Only Fans account. However, fans worry that she might dump her sobriety in the city.

Starcasm thought that she might take up a lifestyle just gambling. And she certainly shares a lot of pictures of herself out at night. Now, she shared a video of herself with a younger-looking man. And, Love After Lockup fans think they both look a bit stoned. WEtv Fans always worried as fighting drug addiction seems very difficult in “sin City.” Several fans commented on the video. One said, “Fkin Crack😀😀😀😄😄.” And, others pointed out that their eyes look “huge.”

Luke Loera gets aggressive with Love After Lockup fans

When Tracie captioned her post, she wrote, “Happy Friday! Y’all have a freaking AMAZING end to this week!” Then, she tagged “@loera_luke.” Well, apart from looking very young, his Instagram reveals just one post, dated three days ago. Tracie follows him, and about 30 other people. Clearly, he’s not an influencer. However, he seems quite aggressive.

When one Love After Lockup fan told Tracie to be careful as he looks like he’s after her money, she didn’t deny it. In fact, her reply read, “They all are Honey!” Then, Luke Loera started in. He also replied, saying, “looks like you don’t even have a leg to stand on going up against me but we will see.” Then he added, “I’m not stressing cause of all these nobody’s and I’m not stressing even if y’all are a somebody. I’m the one who be doing the most cause that’s just the only way.”

Some fans seemed a bit sorry that Tracie maybe took up with a much younger guy. One said, “Why do women date boy Toys…never works.” However, most fans just care about Tracie and don’t want to see her hurt by anyone. And, some people supported them. One Love After Lockup fan wrote, “Nice looking couple, ignore the haters! 🔥💋❤️.”

What do you think about Luke Loera? Do you think Tracie might be dating a much younger man? Do they look stoned? Or, is that just people saying nasty things to the WEtv star? Sound off your thoughts in the comments below.