Chase Chrisley recently shared a photo of himself with his girlfriend Emmy Medders. So, she’s currently a hot topic among Chrisley Knows Best fans. But, what are fans saying about her? Well, they are saying a lot of different things. Keep reading to learn more.

Presently, we know Chase is getting all sorts of different feedback from his massive Instagram following. We know that some of his followers think it is too soon for him to jump into another relationship. One individual even warned Emmy she was just a “flavor of the week” for Chase. Others, however, think the couple look great together. And, they think Chase is incredibly lucky because Emmy Medders could pass for Jessica Simpson’s twin.

There, however, is another pretty interesting opinion that is popping up in the comments of Chase’s recent Instagram post. Turns out, a lot of his followers actually think Emmy Medders looks a lot like Chase’s mother Julie.

So, does his girlfriend look like a younger version of Julie Chrisley?

Now, Chrisley Knows Best fans love Julie. They think she’s gorgeous. She’s funny. And, she must be a strong woman to put up with all of the sass that comes from her husband Todd. So, anyone being compared to Julie Chrisley is a pretty high compliment coming from fans. In fact, many of Chase Chrisley’s fans have flooded his comments to point out that his girlfriend looks like a much younger version of his mother. See some of the reactions below. 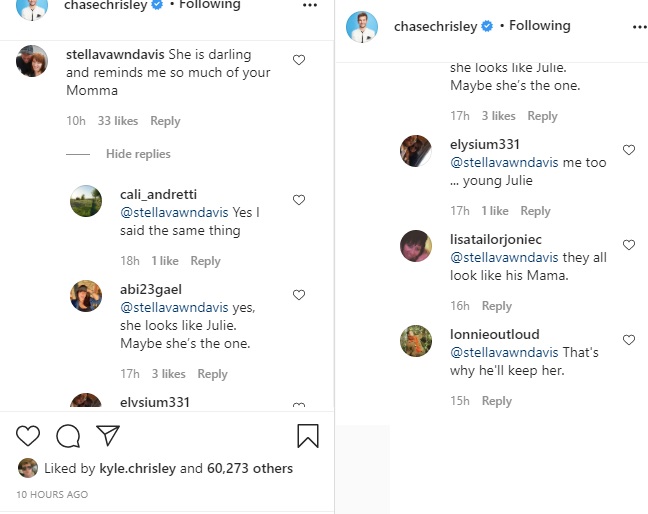 As one can see from the comments above, Chrisley Knows Best fans are reading a lot into Chase Chrisley’s girlfriend looking a lot like his mother Julie. Many suspect that Chase has finally gotten serious about what he wants in a girlfriend. They think that her strong resemblance to Julie means she could finally be “the one” he settles down with. Some even jested it was time for Todd to crack his wedding planner because he was back in business.

Now, Chase and Emmy have only been dating for a few months according to what fans know about the couple. But, they have known each other for years according to Chase. So, it is probably a little difficult to put a timeline on their relationship.

So, do you think Emmy Medders looks like Julie? Do you think she could finally be “the one” for Chase Chrisley? Share your thoughts on his girlfriend with us!