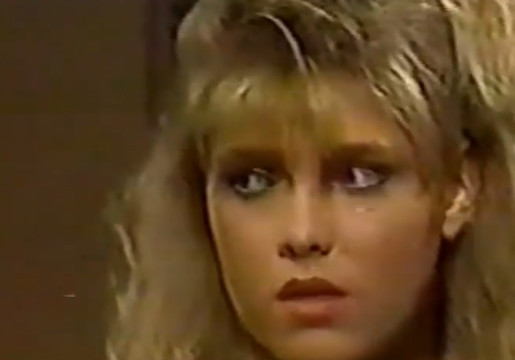 October 9, 2020, is a milestone for Days of Our Lives actress Melissa Reeves. It marks 35 years since she joined the soap as heroine Jennifer Rose Horton. In 1985, Melissa Reeves brought Jennifer Horton back to Salem as a bratty teenager.

But DOOL wasn’t her first soap role. Melissa Reeves played Jade Perkins on Santa Barbara for a short time before coming to Days.

However, Jack was unable to express his feelings for Jennifer, so she chose Emilio. Before her wedding to Emilio, Jack famously kidnapped Jennifer on a firetruck.

Jack and Jennifer’s romance dominated DOOL during much of the late 80s and early 90s.

In fact, they were – and still remain – a fan favorite supercouple.

Then Matthew Ashford was unceremoniously fired for the first time in 1993. Jack left town after blaming himself for baby Abby’s aplastic anemia. Jennifer moved on to other romances, such as Peter Blake (Jason Brooks.)

Melissa Reeves continued as Jennifer Horton until 1995 when she up and quit the daytime soap.

In 1995, the internet was not nearly what it is today. Social media wasn’t yet a thing. Most people didn’t even have home computers yet. News came out once-a-day, not the 24-7 coverage of current times. But still, the news of Melissa Reeves quitting Days of Our Lives was a huge deal.

An even bigger deal was when NBC sued the actress for breach of contract. The parties settled out-of-court, but not before Melissa Reeves took the stand. The court documents revealed the messy truth of her exit: She had been having an affair with co-star Jason Brooks.

However, in 2000, actress Frances Reid passed away. She played Alice Horton, Jennifer’s grandmother, from DOOL’s premiere in 1965 until her retirement from acting in 2007. Melissa Reeves – and Jennifer Horton – returned to Salem in 2010 for Alice Horton’s funeral. Melissa Reeves would return full-time later that year.

That stint lasted until 2006 when the actress and her family moved to Tennessee. Melissa Reeves rejoined Days of Our Lives in 2010 but she is on her way out again.

All My Children Vet Will Take Over Role Soon

Earlier this year, Melissa Reeves came under fire from fans and co-stars for giving a ‘like’ to controversial posts by conservative commentator Candace Owens. The posts were regarding the Black Lives Matter protests.

A few years prior, the actress also came under fire for supporting Chick-fil-A when many people were protesting the chain. So, fans were not happy with Melissa Reeves. In July, TVLiine mistakingly published an article stating Melissa Reeves had been fired from DOOL over the latest controversy.

However, it turns out that they jumped the gun and she wasn’t fired. But in September, it was announced that she wouldn’t be returning to DOOL immediately when production resumed. The official reason is that she doesn’t want to travel from Tennessee to L.A. during a pandemic. She does have a newborn grandson, after all.

So, the soap opera recruited All My Children vet Cady McClain to temporarily step into the role of Jennifer Horton. DOOL hasn’t announced when the switch will happen on-screen. It may be as early as this month, as DOOL’s cache of new episodes taped before the shutdown are running out.

Follow us on social media for all the latest TV news, including Cady McClain’s expected DOOL airdate.

Days Of Our Lives airs weekdays on NBC.

‘General Hospital’ Spoilers For April 12-16: Will Lying Liars All Be Caught?
‘Bringing Up Bates’ Season 10 Teaser Reveals ‘A Lot Has Happened’
‘Days of Our Lives’ Spoilers: The Morning After For Xander & Chanel
Busby Birthday Quints Each Got Their Own Special Cake This Year
Moriah Plath Finally Gets To Spend Time With Her Sisters – See Photo