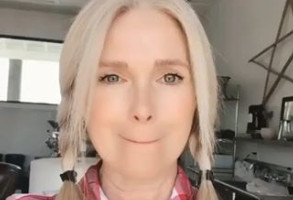 Days of Our Lives fans were shocked to wake up to the news that Melissa Reeves has been fired. The supposed firing comes weeks after she found herself in hot water after ‘liking’ social media posts from controversial commentator Candace Owens. The social media posts were anti-BLM in nature.

However, the article seems very shaky. Don’t believe everything you read on the internet!

In the wake of a fan noticing that the actress hit ‘like’ on several questionable posts from Candace Owens, two of her co-stars spoke out. Linsey Godfrey (Sarah) expressed her disappointment. A fan wrote that Missy, as she’s known to fans, was nice when the fan met her. In response, Linsey wrote that “Even the nicest people can have awful views.”

One of the few black actors on the show, Lamon Archey (Eli) ‘like’d Linsey’s posts about the situation. He then shared a gif to his own account. The gif is former All My Children actor Michael B. Jordan writing on a pad of paper. Lamon captions the gif, “Who else ya got?”

Fans took the gif as a reference to the Melissa Reeves situation.

Not Her First Foray Into Controversy

‘Liking’ Anti-BLM posts isn’t the first time Melissa Reeves has come under fire. Many years ago, she left DOOL in the mid-90s. She promptly found herself in a lawsuit with NBC  for breach of contract. During the court sessions, it came out that Melissa had an affair with former co-star Jason Brooks (Peter.)

In 2012, Melissa took up in defense of fast food joint Chick-Fil-A. At the time, the eatery was under fire for funding anti-LGBTQ+ organizations. At the time, people were boycotting the fast food joint. However, Melissa purposely ate there and tweeted her support for the chain, citing freedom of speech.

The article claiming Melissa has been fired from DOOL was posted on Yahoo’s site late July 13. The TVLine byline, along with renowned soap writer Michael Ausiello’s name. However, if you go to the TVLine site, the article is not there. Not only that, the Yahoo article is the only one that shows up in a Google search.

The body of the article offers very few details of the alleged firing. In fact, aside from a few new paragraphs, the article is a word-for-word recreation of a previous TVLine article about the controversy.

Michael Ausiello’s Twitter has nothing new on the supposed firing. In this age of social media, articles are posted on Twitter to garner more views. Alan Sarapa, a respectable soap podcaster, also doubts the legitimacy of the article.

I don't think that Melissa Reeves story is real. Michael Ausiello is under the byline, but this story isn't on his baby TVLine? Doesn't pass the smell test to me. #Days

As of right now, Melissa’s alleged firing is just a rumor. Check back with us for updates as the situation develops.

Days of Our Lives air weekdays on NBC.

Update: TVLine printed a retraction early this morning. They assure fans that Missy has NOT been fired.