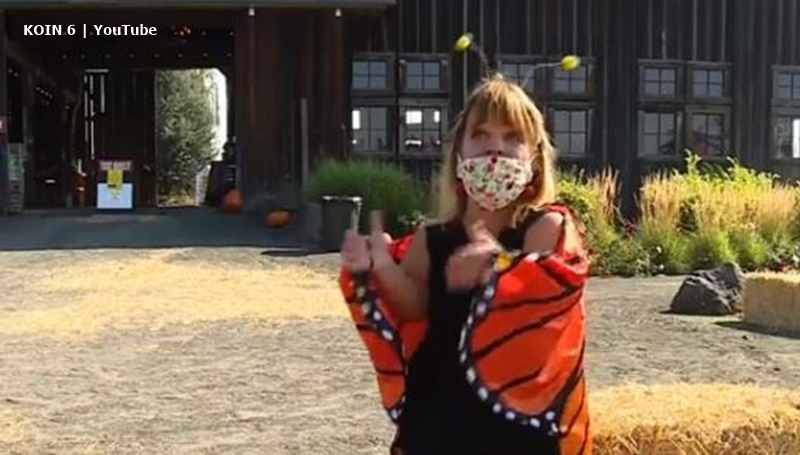 LPBW fans heard that the Pumpkin Season event on Roloff Farms went ahead this year. Because of COVID-19, they scaled it down and came up with a walking trail, the pumpkin patch, and the gift shop. And, some fans sounded thrilled to hear that Amy also attended. But one disgruntled fan complained about their visit. However, other fans suggested they give the Roloffs a break.

We reported that Matt and Amy promised a fun season at the farm despite scaling back the activities. Because of the coronavirus, they took away access to a lot of the usual activities. But, although limited numbers would be entertained this year, it sounded like a fun opportunity. And of course, most fans go there in the hopes of a chat or a meet-up with the TLC stars.

But for one fan, it seemed disappointing. When Amy shared on Instagram about making some soup, a LPBW fan complained. It looks like they went all the way there, only to end up feeling a bit snubbed. The fan wrote, “I went yesterday to visit you, to see what it was like and it’s nothing like TV. I thought maybe you guys could be more friendly less attentive to your phones and more about the people that support you guys. I have to remember its reality TV.”

Little People, Big World Fans say give them a break

Well, it only takes one negative review to turn off people who might plan the trip for themselves. And, a couple of people said they wouldn’t bother going there if that’s the case. In the comments, the ex-Little People, Big World fan described their experience. They noted, “When we got there. I saw Matt, told him hello and how was his dog. He was hi but didn’t really make the time to respond back it was all about the phone. Same thing with Amy. on top of it, it wasn’t even busy.”

Loyal LPBW fans cautioned people not to cancel their visit to Pumpkin Season just on the word of one person. As one person pointed out, maybe they don’t like getting too close and talking with people. After all, the virus is contagious. And other people claimed they never experienced that. In fact, one person who went this year talked about their experience. They said,  “we went and the whole family was super awesome.. make the trip it is well worth it …. understand they are just like us they have lives.”

Both the temperature outside and the leaves are falling! 🍁 Which makes it the perfect time to whip up a hearty batch of soup. There's nothing better than a warm bowl of soup on a chilly autumn day. 😊 The recipe is on my website amyjroloff.com! The link is in my bio.

Are expectations too high?

Others said they should give the family, a break. After all, maybe they use their phones to communicate with their workers. And, others suggested people should treat the visit as just another opportunity to pick up some pumpkins rather than going there to specifically talk to the TLC stars. One fan slammed the negative review, saying “[Amy] owes you nothing. If you want a pumpkin that’s great. Get a pumpkin or don’t even go, that’s your choice. Give them a break.” What do you think? Sound off your thoughts in the comments below.