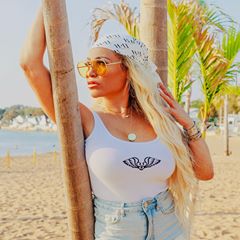 Darcey Silva may be the unluckiest 90 Day Fiance star in the history of the popular Tv show. Darcey is learning some disturbing information about her boyfriend Georgi Rusev.

This sneak peek was a shocker

A sneak peeks of Sunday’s upcoming episode of Darcey & Stacey,  reveals a shocking secret. Darcy’s lover Georgi, whom she met on social media, is still married! She has been featured in all four seasons of 90 Day Fiancé: Before the 90 Days and has been unlucky when it comes to love.

Darcey states that her romance with Georgi has been vastly different from previous relationships. Especially the one she’s had with former boyfriend Jesse Meester. “He’s one-of-a-kind. He’s so genuine and compassionate and very affectionate. He dotes over me. He’s very much a relationship type of guy. Plus he’s sexy and hot on the outside and the inside he’s so loving,”

Darcy speaks out about Georgi

According to People.Com, Darcey states “there’s one thing that’s come to the surface being in quarantine with Georgi.” She continues “I haven’t said anything to anybody — not even you guys,” tells a producer in a confession. “It just started to feel like I needed to talk about it with someone other than Georgi because I need to understand it myself.”  This is wild.

“He told me that he’s still married but he’s separated, going through a divorce,” Darcey continues. Georgi a Bulgarian masseuse, admitted In another confession,  that he’s been “married for three years. Viewers are already pessimistic about Darcey’s and Georgi’s future together. Fans are speculating that Darcey could be on the verge of yet another breakup.

Darcey Silva doesn’t give up

Darcey has declared that she will never give up in her search for the perfect relationship. It appears that her latest relationship with Georgi could also end in a separation. Fans believe that Georgi is hiding more details about marriage. Some viewers have even speculated that he already has a child from his previous marriage. Wow that would be crazy.

Darcey’s relationship with Georgi came after she ended things with her ex, Tom Brooks. Darcey desired to get an engagement ring from her British boyfriend, but Tom didn’t seem to want to take the relationship to that level. After two years together, the couple called it quits in April of this year. After her break up with Tom Darcy stated”I took my time to heal before deciding to meet [Georgi]. We ended up meeting in Miami in February during Super Bowl and we just had a lot of fun together,” Darcey told Entertainment Weekly recently.

Make sure you don’t miss the new episodes Sunday night on TLC.