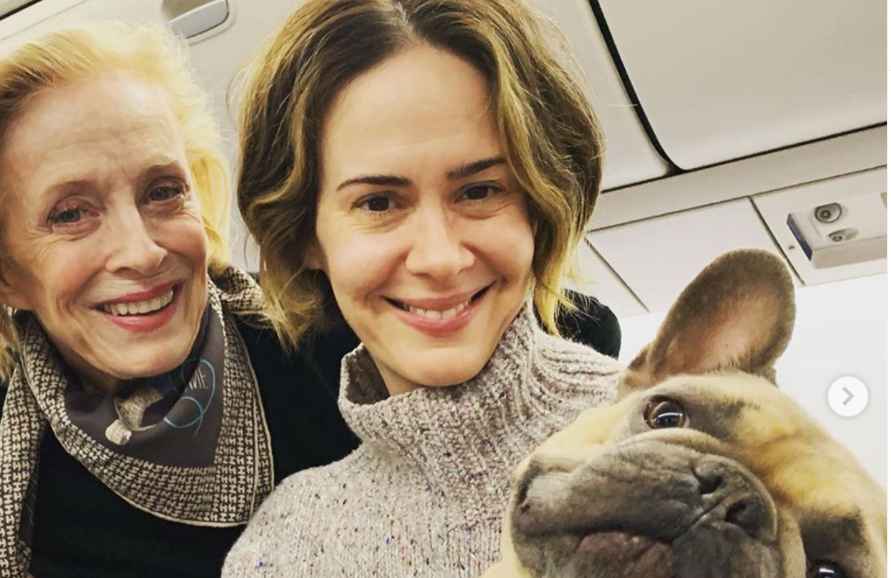 Fans know Sarah Paulson from American Horror Story and the latest Netflix great, Ratched. Holland Taylor starred in the sitcom Two And A Half Men and also starred as a nosy neighbor in the Stephen King adaptation Mr. Mercedes and many more films and shows. Sarah and Holland have been together since 2015. Many fans wonder how they keep their relationship alive, especially with the 32-year age gap.

Netflix fans have been bingeing Sarah Paulson’s latest epic series, Ratched, where she plays the role of Nurse Ratched. The series is a prequel of the epic film One Flew Over the Cuckoo’s Nest. While Paulson’s character in the show has a stressful lifestyle, Sarah herself reckons she lives stress-free.

Sarah recently opened up to The Guardian about her and Holland’s lifestyle and how they keep the perfect balance. She said she has been spending plenty of quality time with her partner Holland during the coronavirus pandemic. Some people found it difficult to be constantly locked down at home in quarantine. However, it looks like Sarah and Holland have the perfect recipe.

While Paulson and Taylor live together, they also still own their own homes. This meant they could take a break and spend time alone whenever they chose during the lockdown. Sarah said, “For the whole beginning of the relationship and the last five years, we have lived together.” She then went on to say how their relationship changed during the COVID-19 pandemic. “Really, the change happened during the pandemic, which was: we have an opportunity to protect our relationship by spending some time apart, and I think we should do that.”

Sarah did say they spent more time together than apart. However, there are several nights in a week where they talk to each other online. Both she and Holland get to do what they want when they want. Sarah stressed that they are both “exceedingly independent people.”

#PerfectUnion 2019 and then some Happy New Beginnings to all. And to the country. Onward.

What about that age gap?

Speaking of the 32-year age gap between them, Sarah Paulson said, “I don’t remember people going nuts about Michael Douglas and Catherine Zeta-Jones, in terms of their age difference.” She does have a point. It always seems to be a problem in people’s eyes when the woman is older.

As for Holland, she expressed her surprise at the public’s interest in their love life. Hello! quotes an interview with Taylor by InStyle in 2018. In it, Taylor said she is from an older generation, and for her, it is quite surprising how people speak about personal things like this in the media. To Taylor, this isn’t natural, but that this doesn’t mean it isn’t a good thing. Holland added that it just needed some adjustment for her. As for Sarah, Taylor said she is of a different generation and is “very much of today.”

Holland admitted that it was hard for her at first to “go through that membrane of being a private person.” Now she admits it has been good for her to do this in such a lovely way.

‘RHONJ’ Season 11 Episode 8 Recap: April 7
The Busby Quints Birthday Brings Old Pics – Can You Identify The Babies?
Tiffany Espensen Wants A Cute Baby – Lawson Bates Tells Her ‘No’
Is Michaela Bates Sharing Anything About Her Struggle With Infertility?
‘Below Deck Sailing Yacht’: Paget And Ciara Broke Off Their Engagement