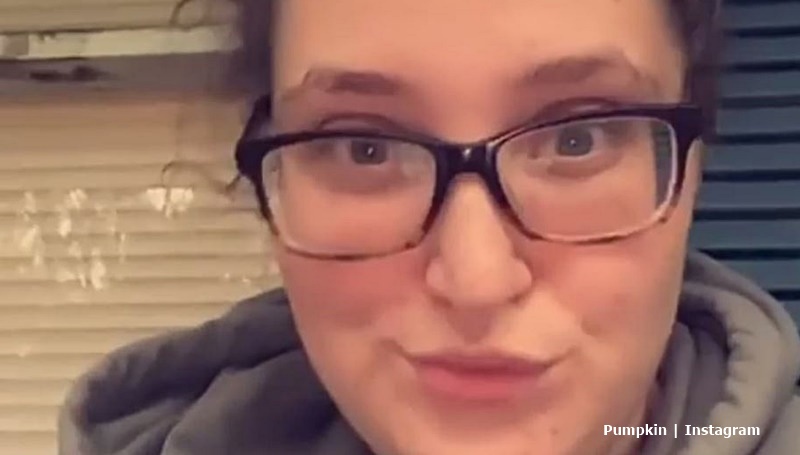 Pumpkin, Mama June’s daughter, raises her delightful toddler Ella Grace. And, she often posts up photos of her with June’s grandchild. Lauryn, aka Pumpkin, works hard at losing weight, and now she changed her hairstyle. Plus, fans recently saw her wearing some really fashionable clothes. But, some trolls just talked about her teeth.

Pumpkin shares about a new hairstyle

Taking to her Instagram on Tuesday, Pumpkin shared a photo of herself with Ella Grace. The light and the filter gave the whole picture a sort of soft orange shade. She captioned it with, “So I cut my hair and got bangs. (I don’t know yet if I like it or not) ❤️.” Actually, some people think it makes her look younger. And, a couple of fans joked with her. One said, “Not the bangyanggggggg ?.” Then, one fan agreed with Pumpkin about uncertainty. They said, “Same. I have a love/hate relationship with bangs!?￰”

One Mama June: From Not To Hot fan noted that she usually just “likes posts” and moves on. But they commented this time, saying, “I gotta comment the bangs lol beautiful girl.” Actually, most of Pumpkin’ss WEtv fans liked her with the bangs. One fan wrote, “Oh my pumpkin you completely glow…you’re simply just beautiful and your baby girl is a little beauty.” Overall, fans liked her new hairstyle. But a few trolls talked about her teeth.

Fans like the bangs but trolls talk about teeth

Trolls love to find something they can complain about. And, inevitably, they come out of the woodwork. This time, a couple of fans talked about Pumpkin’s teeth. One said, “brush your teeth.” But as another follower pointed out, the filter makes the picture look orangish. And, even Ella’s teeth look that orange sort of color. Fans know from the show and other posts that Ella’s got little pearly-whites.

Pumpkin makes a big effort at looking good these days. We reported that Mama June’s daughter got rid of the nose ring. And, fans noticed that she wears some attractive clothing these days. Plus, she evidently lost some weight at last. The Sun reported in April that Pumpkin shed some weight. It came at about the same time that her sister Jessica dropped her weight “to 230lbs.” She managed that with a gastric balloon and liposuction.

Apart from restyling her hair and going for bangs, Hollywood Life reported that she also goes for shorter hair and an “all-over dark brunette color.” Many fans liked the new look of her “shoulder-length bob.” What do you think of Pumpkin going for a new hairstyle with bangs? Do you think the darker look suits her? Sound off your thoughts in the comments below.