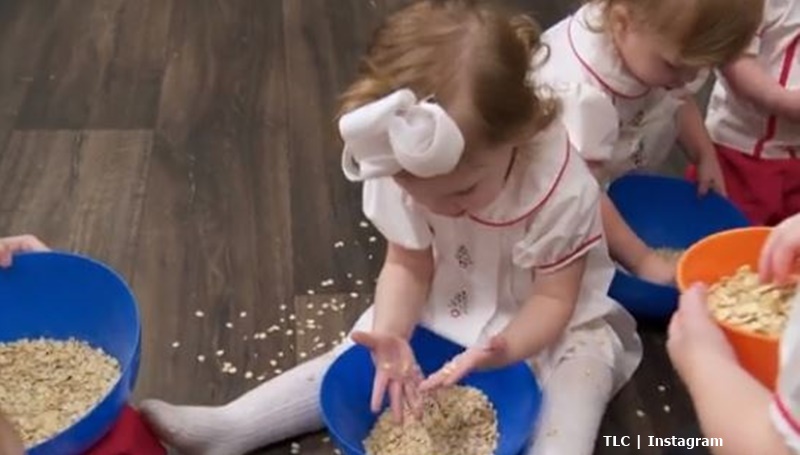 Sweet Home Sextuplets premieres a new season on September 29. It comes directly after the new season of Little People, Big World on TLC. Once again, fans see a lot of chaos in the Waldrop family with their sextuplets, and three older boys. Even worse, this season reveals they live in the trailer home while the main house undergoes renovations. And, Christmas brings chaos with oats and glitter all over the place.

TLC shared a short teaser on Instagram on Monday. The network noted, “ADORABLE BABY ALERT: Sextuplets make “reindeer food” for Santa ❤️. Then they explained, “Courtney and Eric have a surprise for the sextuplets! The most important ingredient: glitter.” In the video, Eric explains that they make cereal for Santa’s reindeer. And, the glitter in it “helps them fly.” Well, Courtney then chips in. She says this year’s the first time the “babies” helped make it for them. But naturally, the sextuplets don’t really understand what’s going on.

As the kids mix up the ingredients, things get chaotic as the Sweet Home Sextuplets kids start emptying bowls of it on the floor. And, the bigger brothers don’t help as they skid around in it. Eventually, the place looks like a complete mess. And, Courtney explains it’s worse living in a trailer home. Naturally, TLC fans responded to the teaser. And, some of them felt “anxiety,” not unusual with this family.

The Waldrop babies toddle around now, and they look very adorable, fans agree. But, they also look totally exhausting. One fan commented, “This gave me anxiety.” And, another one noted, “That mess would have got me LIVID!!” And, another fan noted, “You two are my heroes! Do you know what Oates/glitter all over the house would do to me.🔥I’m not saying it’s right- I’m just saying I would be embarrassed of the anger level I would get to.”

Actually, the fact that Courtney lives through all the chaos with so much patience appeals to her Sweet Home Sextuplets fans. One of them did something similar. They commented, “Fun! I did flour and baby oil. I just didn’t have food coloring. So much fun for my daughter who is 4. Put it all over her dolls.” However, most fans just can’t see themselves in that situation.

Courtney and Eric have a surprise for the sextuplets! The most important ingredient: glitter. Set your DVRs for the return of #SweetHomeSextuplets tomorrow at 10/9c, right after #LPBW.

Six babies- too much mess

Six babies and three older kids along with mom and dad in the trailer home must be a nightmare. Fans agree that they “just can’t” with messy kids. As one fan pointed out, “Cleaning up oats and glitter for the next 2 months. 🤦‍♀️parenting rule #1 messy cr*p outside!”

What did you think of the Sweet Home Sextuplets teaser about Christmas chaos? Sound off in the comments below.