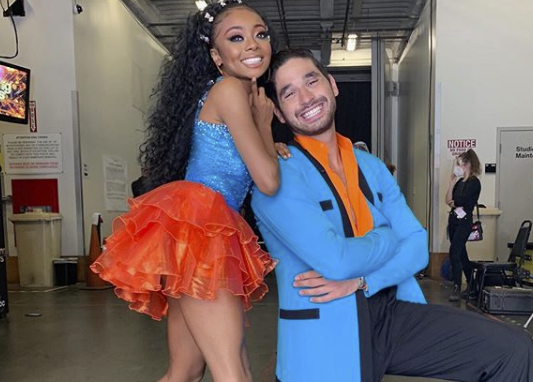 On Dancing With The Stars this week, viewers were shocked to see fan-favorite Skai Jackson score lower than even Carole Baskin. But even so, she’s not letting her low score put a damper on her mood.

“It was a little bit nerve wracking, but I’m just really excited that we got saved,” Skai told ET. “I was always taught that if something like that does happen, you keep going, you don’t give up. And that was what was going on in my head.”

She went on to say the floor was a little slippery and that was partially to blame for the slipup during her routine. Skai’s partner, DWTS reigning champion Alan Bersten, is impressed with her resilience.

“She didn’t let that little slip-up stop her, and to me, that means more than the judges’ scores,” Alan also told ET. “I respect what the judges say, obviously, but just that determination and that passion to keep moving forward is the most impressive thing to me.”

Fans loved Skai’s Samba to “Miss Independent,” even if the judges didn’t. Take a look for yourself and see what you think:

Will Skai Jackson Crush The Competition During Disney Night?

Dancing With The Stars week 3 kicks off on Monday, and it’s going to be Disney Night. As a Disney Channel star, Skai is really in her element. She and Alan will perform a Jive to “Almost There” from The Princess and the Frog.

When you realize you’re still in it and get to do it again next week. 💃🏽 #TeamReachForTheSkai #DWTS

And of course, DWTS insists on sticking with the cat theme for Carole Baskin. After choosing “Eye of the Tiger” and “What’s New Pussycat” it only makes sense that they would make her do a song from The Lion King for Disney Night. However, Carole’s time on DWTS could be almost up. She was in the bottom 2 with Charles Oakley last week. Derek Hough chose to save her at the last minute.

Many Fans Feel The Judges Are Too Harsh This Year

However, fans are responsible for saving their favorite dancers. Everyone loves Skai and no one is happy about the results this week. They feel that the judges treated her incredibly unfairly. Some think voters may take their feelings out on Carole and leave her in the bottom again this week. Many viewers are angry that Carole scored higher than Skai this week.

But the fans aren’t the only ones unhappy with the judges. Contestants Nelly and Johnny Weir both said they feel like the odds are stacked against them.

So what do you think about Season 29 this far? Were the judges too harsh on Skai Jackson? Are they tending to favor Carole Baskin? Make sure to tune in for Disney Night and see what happens next.