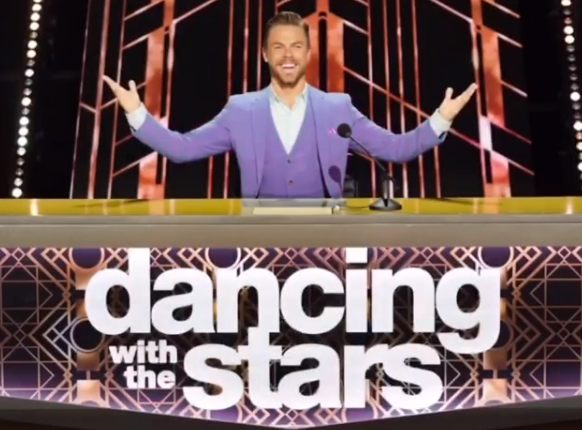 Get ready, Dancing With The Stars fans! Derek Hough will take a short break from the judging table to have his own performance on the stage this season. The former pro confirms to Us Weekly that they’re still trying to work out details, but there is a plan in place.

Derek Hough was a professional dancer on the show from 2007 to 2016. During his time on Dancing With The Stars, he won six Mirrorball Trophies. This is the most any professional dancer has won in the show’s history. This season, Hough fills in for Len Goodman, who had to sit this season out due to travel restrictions imposed by the Coronavirus pandemic.

Some Love Derek Hough As A Judge, Others Think The Judges Are Too Harsh Now

Since Hough came to the judges’ panel, many viewers and contestants alike feel that the competition is too strict. Hough has likely seen the criticism online. He recently posted an Instagram video poking fun at his fellow judge, Carrie Ann Inaba, for her own strict judging habits.

Carrie Ann took the joke in good fun. She commented, “Indeed. That is exactly right. You know the rules… 🤗🤗🤗🤗 #liftpolice”

All jokes aside, the judges seem to be a little harsher this year than in previous seasons. Fans have been quite vocal about their issues with the judges in comment sections, but even the celebrity contestants aren’t holding back this year.

Nelly was very blunt about his feelings after the week 2 episode.

“They’re whack, whack, whack. They’re hating,” Nelly told Us Weekly. “I feel like the judgment should come with understanding! You’re judging me. I’m from the hood in St. Louis, Missouri. There are no ballrooms. I’ve never danced, choreographed in my life and you’re judging me like I should know these things and I just picked up this choreography in five days.”

Fellow competitor Johnny Weir chimed in and expressed similar sentiments. He says that the judges are holding him to a higher standard because of his Olympic background. Olympians do typically do very well when they compete, but Weir points out that figure skating and ballroom dancing can’t be directly compared.

Will Things Get Better In The Upcoming Weeks?

Since fans and competitors have both been vocal about their feelings, the judges will hopefully dial things back a bit. Only time will tell. Dancing With The Stars will host Disney Night on Monday night, and perhaps will be a little kinder with their words. Stay tuned for more.