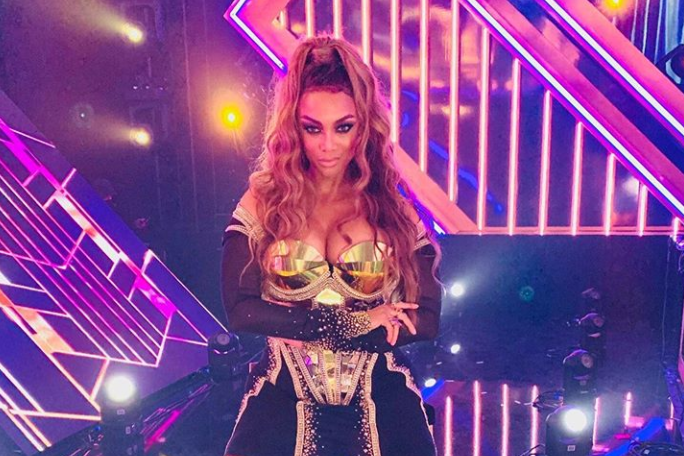 Tyra Banks continues to ask loud questions and wear wild outfits, and fans still aren’t into it. While hosting Dancing with the Stars, the former model already caught a lot of criticism. Fans felt like she was making it all about her and not the dancers.

During the second week, the beginning of the show was devoted to Tyra teaching the contestants to “smize.” After that she proceeded to ask what fans thought were inappropriate questions at odd times. She had a particularly awkward exchange with AJ McClean after his performance.

He already had his emotions running high and she kept telling him to tell his wife how he felt. One fan commented, “The questions tonight were weird and uncomfortable, especially for AJ! Please do better.”

The strange questions weren’t the only things fans criticized. They also pointed out that Tyra kept interrupting Carrie Ann Inaba, Bruno Tonioli, and Derek Hough. One said, “Why are the judges comments being cut off for Tyra to ask a dumb question? The couples need to hear the comments to know how to improve.” Another said, “Tyra cuts off the judges and they don’t have enough time to give good feedback. She then uses up all the time.”

Several other fans expressed the same thoughts on her Instagram. Since Tyra Banks is now a producer on the show, fans are accusing her of using that to get the most screen time. They maintain that the judges are there to help the couples improve. Her questions are not helping.

Another fan thought Tyra’s choice of words weren’t appropriate for the show. They said, “Leave the slang at home! This is the ballroom for elegance and poise. I’m young and it’s hard to follow, I can only imagine how hard my grandmother is having trying to watch.”

She’s about to catwalk out onto the @dancingabc dance floor LIVE. What will TyTy wear??? Hint: She gone be shiny, y’all!🏅

Fans Are Tired Of The TyTy Show

In one of her most recent posts she said, “She’s about to catwalk out. What will TyTy wear? Hint: She gone be shiny, ya’ll.” One fan responded, “Can you please stop talking about yourself? Enough. It is such a turnoff whenever you find a way to bring your “career” into a conversation.” They went on to say this was especially true because the show had nothing to do with it.

It isn’t bothering Tyra, because in the very next post, she posted her outfit. She said, “Who guessed gold tonight?” Some of her fans did come to her defense against the digs. According to the Inquisitr, fans said that Tom Bergeron and Erin Andrews would banter with the judges and contestants often. There’s still a long way to go. Dancing With the Stars airs Mondays and the best is yet to come!