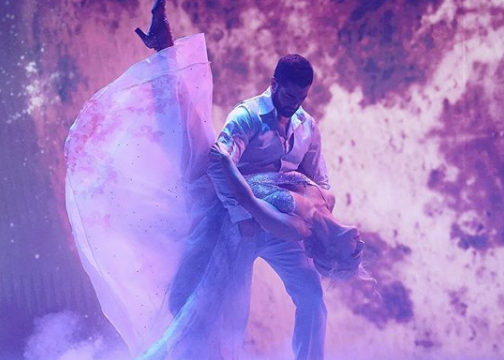 In every season of Dancing With The Stars, there is always one couple that has captivating chemistry. This year, fans agree it’s Jesse Metcalfe and Sharna Burgess. Their Foxtrot to “Dreams” by Fleetwood Mac was absolutely stunning, and now everyone’s talking about it.

If you haven’t already seen it, you can do that right now:

The pair’s performance also pleased the judges. Jesse and Sharna received a score of 20, one of the highest of the night. Fans are pretty sure they’ll be around for quite a while.

Sharna Burgess sat down with Us Weekly to discuss their time on the show so far.

“This was a song that meant something to Jesse. It was about a lot of the things that he’s had to sacrifice — and some of those things are relationships — to be able to be great at what he does and follow his dreams,” she said. “So, we decided together that I would represent one of those relationships that he had to walk away from. So those face holds and when he finally walked away from me at the end, it was that moment of ‘I’m sorry, I have to go, and I have to do this.’”

Sharna also commented that there was definitely chemistry between the two and that made it very easy to have such a stellar performance. But fans are still hoping for a little more.

Jesse is dating model Corin Jamie Lee Clark, but Sharna is single. In fact, she was in talks to become the next Bachelorette in Australia. She ultimately turned down the role because her life is in the U.S. now, but she’s still looking for love.

And it wouldn’t be the first time romance blossomed on the Dancing With The Stars stage. Nikki Bella and Artem Chigvintsev met when they were paired together for Season 25. At the time, Nikki was dating fellow WWE star, John Cena. After their split, she reconnected with Artem. Now the two are engaged and have a baby boy together. Could Sharna Burgess and Jesse Metcalfe be the next couple to find love on the stage?

In any case, it’s clear from their performance and their interactions off stage that the two will be great friends long after the competition is over. They are definitely having a lot of fun practicing their new routines. Jesse is even losing weight from dancing. He’s down eight pounds since the competition began. After years of saying no, it seems he’s glad he joined DWTS this season.

Who is your favorite couple on Dancing With The Stars this season? Be sure to let us know. Check back next week and see how Jesse and Sharna perform. We can’t wait to see what’s next for them.