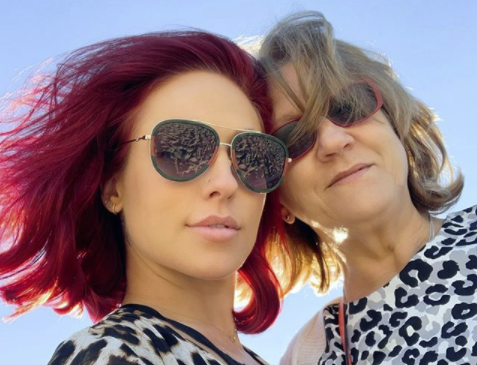 Dancing With The Stars fans know Sharna Burgess as a fiery redhead. However, the Season 27 winner is going for a different look these days. Over the past few weeks, Sharna documented her new hair journey as she went from bright red to blonde with a touch of rose gold.

“I absolutely need to take more photos… feels weird posting anything with my red hair now that I’m blonde and feel like it’s SO UNBELIEVABLY DIFFERENT. So.. until I do that… it’s gonna be shameless selfies as content 💁🏼‍♀️” she wrote in an Instagram post.

We think she looks incredible! Tell us what you think of Sharna’s new look in the comments.

I absolutely need to take more photos… feels weird posting anything with my red hair now that I’m blonde and feel like it’s SO UNBELIEVABLY DIFFERENT. So.. until I do that… it’s gonna be shameless selfies as content 💁🏼‍♀️

The 35-year-old dancer won DWTS Season 27 with her celebrity partner, Bobby Bones. However, the show’s executives did not ask her to come back for Season 28. While she sat out, Sharna teased that she was in talks to appear on Australia’s version of The Bachelorette.

“I am getting more and more open to being the Bachelorette. I just got back from Australia and it became a pretty hot topic over there on whether I could be the next Bachelorette in Australia, so that’s an interesting thought for me. I’m excited by it!” she told PopCulture back in November.

However, we recently learned Sharna Burgess turned down the role.

“I considered it long and hard and thought about it, but it didn’t feel right for me,” she said. Even though she’s a native Australian, Sharna Burgess now lives in the United States. It’s going to be fairly difficult to get involved in a long-distance relationship in the middle of a global pandemic.

“It didn’t feel like it lined up right, but who’s to say that that next year it won’t? If I’m still 36 and single next year, I’ll be calling The Bachelor like, ‘Okay, let’s do this! I need some help,'” the dancer said.

We really think Sharna Burgess would be an excellent addition to The Bachelor/The Bachelorette cast, but we respect her choice. Perhaps she could be on the American version instead.

Could She Return to Dancing With The Stars?

Since she chose not to appear on The Bachelorette Australia, Sharna could be in talks to reappear on Dancing With The Stars. She told Us Weekly that she would love to return to the show again. We also know that pros Witney Carson and Lindsay Arnold will be sitting this season out due to their pregnancies. Additionally, pro Emma Slater just got her real estate license and is considering a complete career change. There may be room for Sharna Burgess this season after all.

What do you think is next for dancer Sharna Burgess? Let us know in the comments. We know we would definitely love to see her come back for Season 29!