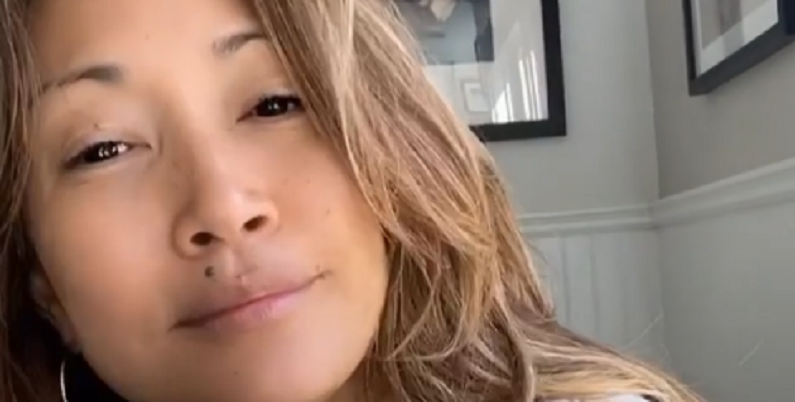 Carrie Ann Inaba has a new love in her life. And she thanks Sharon Osbourne for helping her find him. The Dancing With the Stars judge revealed that she found love amid the pandemic. Carrie Ann first talked about the mystery man on the Season 11 premiere of The Talk.

The former dancer teased a photo of herself kissing a man. Now, the 52-year-old decided to share the details of her new relationship. Carrie Ann absolutely glowed during the segment as she discussed her love life. She revealed that she met her new love close to home amid the ongoing coronavirus pandemic.

Carrie Ann’s story will give some single and lonely people a little hope in uncertain times.

During a segment on The Talk, Carrie Ann Inaba announced that she’s in love. The two have been dating as of recently.

“I have fallen in love, and I am now in a committed relationship,” Carrie Ann revealed. “It happened.”

She also credited her co-host Sharon Osbourne for helping her find love.

“Mrs. O, you asked for it, remember for the beginning of the year we did our dreams and our wishes for everybody?” Carrie Ann asked Sharon. “You called it. So, thank you. I wish you would have done it earlier, but anyway.”

Carrie Ann and her new boyfriend met near her California home. He lives right in her neighborhood. Their story is like something out of a romantic comedy. She revealed that they met while “walking our dogs.” Carrie Ann said that he’s an “older” man named Fabien.

Because of him, she finally understands “how a relationship can work.” During the segment, The Talk co-host said that he’s been “so supportive and such a mature adult,” even though she’s not. Carrie Ann said that their relationship is going “really well.”

Fans showed their love for Carrie Ann during the segment. They took to the comments section of the YouTube video to let her know that they’re happy for her. Earlier this month, Carrie teased her mystery man on Instagram. She posted a photo of herself kissing a gray-haired fella who she referred to as “mi amor.”

Carrie Ann wished him a happy birthday and that her life was “so much better” wit him around. She’s always been open and honest about her relationships with her co-stars on the CBS daytime talk show. Back in 2017, she called off her engagement to ex-fiance Rob Derringer. Prior that, Carrie Ann was in a long-term relationship with DWTS pro dancer Artem Chigvinstev.

Since she lucked out in love, Carrie Ann took a break from dating. In a recent interview with Closer Weekly, she admitted she was “almost” dating someone. She credited her Talk co-stars for helping her finding love again.