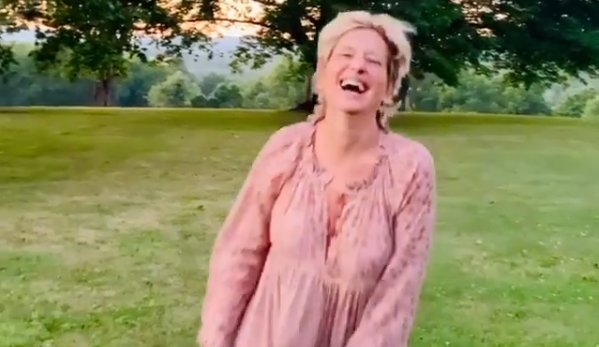 Dorinda Medley is in a better mood these days. This comes weeks after she announced her exit from The Real Housewives of New York. In part two of the reunion, she hinted that she’s seeing someone. However, it’s hard to date when there’s a pandemic.

On the Thursday, September 17th episode, Dorinda revealed that she’s dating someone. This comes over a year after her split from ex-boyfriend John Mahdessian. She couldn’t stop smiling when she started talking about the mystery man. Even Luann de Lesseps said that Dorinda is happy every time she talks about him.

So, who is Dorinda seeing?

“You know, we’ll see,” Dorinda said with a smile on her face. “Not to be spoken of.”

Luann de Lesseps chimed in and said that she’s been talking to someone. She also noticed a change in Dorinda’s demeanor. Apparently, this mystery man puts her in a good mood. It’s nice to see, considering she’s been labeled a “mean drunk” this season.

“Whenever she talks about him, her face lights up,” Luann revealed.

However, Dorinda wouldn’t spill the details on her new man. She wouldn’t even utter his name. She simply stated that their relationship is “new.” She wants to see where things take them after the pandemic.

“We’ll see,” Dorinda continued. “He’s very busy and so I’m just going to wait until COVID-19 is over and see where it is.”

But she still couldn’t stop smiling. When Andy asked which Housewife could end up in a “monogamous relationship,” the cast agreed that it would be Dorinda. Ramona Singer said that her former co-star “falls hard.”

“I don’t know how to do anything other than monogamous relationships,” she said with a smile on her face.

This comes after Dorinda and John ended their relationship after seven years together. She previously revealed that the two didn’t have a dramatic breakup. They just grew apart over time. Dorinda called their split a “reset.”

She’s not returning to RHONY

Fans won’t find out who Dorinda Medley is dating on the new season of RHONY. Last month, she announced her departure from the show. She was on the popular reality series for the past five seasons.

“What a journey this has been,” Dorinda wrote on Instagram. “I have laughed and cried and tried to Make it Nice… But all things must come to an end. This was a great outlet for me to heal when my late husband Richard passed away. I have met so many interesting people and learned so much about myself, about life and about women along the way.”

RHONY currently stars Ramona Singer, Luann de Lesseps, Sonja Morgan, and newbie Leah McSweeney. Tinsley Mortimer announced her exit from the show earlier in the season. She moved to Chicago to start her new life with Scott Kluth. But during Thursday’s episode, Dorinda revealed her disappointment in Tinsley for leaving the show in the middle of the season.

Check back with TV Shows Ace for the latest news on your favorite RHONY co-stars.