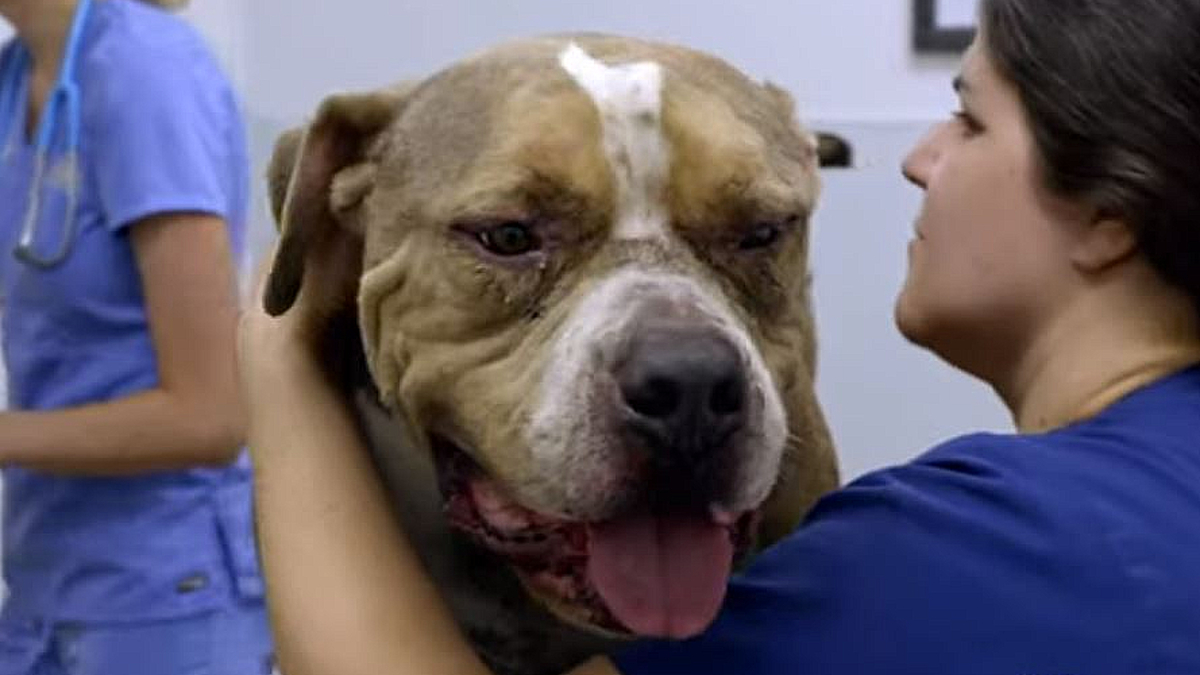 On Saturday’s next episode of Pit Bulls & Parolees on Animal Planet, we meet poor Sampson, a pit mix who is at the vet’s office being evaluated by a team.

Villalobos Rescue Center (VRC) all-star Mariah is there with Sampson, and her heart is breaking for this dog.  We see in this preview clip that he has raw bloody paws and some missing claws.

What could Sampson have been running away from?

The twist comes in TV Shows Ace exclusive clip when the vets scan him and sure enough, Sampson is chipped.

This has Mariah worried because of all the questions she has for the owners, and the fact if they are abusive and Sampson was running from them, why? The last thing she wants to do is to place this rescued dog back in their clutches.

The clip opens inside the veterinary offices as the team is evaluating Sampson, a rescue Mariah has brought in for an all-over exam.

The dog is chipped which alerts them all, why would Sampson have such damaged raw and bloody paws? What was he running from.

Mariah explains on camera why she is now apprehensive about contacting the owners of Sampson. The vet explains the damage in detail, the dog has likely been running for long stretches on hot asphalt, concrete and what is worse is that it looks like someone may have damaged his claws, or the dog was trying to claw its way out of a cage or confined space.

Either way, it’s not good news, especially if the chip reveals the owner and the dog has to legally be returned to them, even if they were the cause of the abuse. Mariah will have to tread carefully and investigate the situation thoroughly.

Tia Torres and her family own and run Villalobos Rescue Center, the largest pit bull rescue center in the country, where she works tirelessly to dismantle the unfair stereotypes placed on pit bulls and other large breed dogs which are hard to place.

Together they work hard to rescue, rehabilitate and rehome these unwanted dogs that have been discarded, demonized and abused due to the reputation of their behavioral issues and breed.

And after nearly 30 years in rescue, Tia thinks she has seen it all – but her new home in New Orleans has a whole new set of challenges.

In addition to watching the show on Animal Planet, viewers can stream episodes of PIT BULLS & PAROLEES on the Animal Planet GO app. They can join the conversation on social media by using the hashtag #PitBullsandParolees and follow Animal Planet on Facebook, Twitter and Instagram.