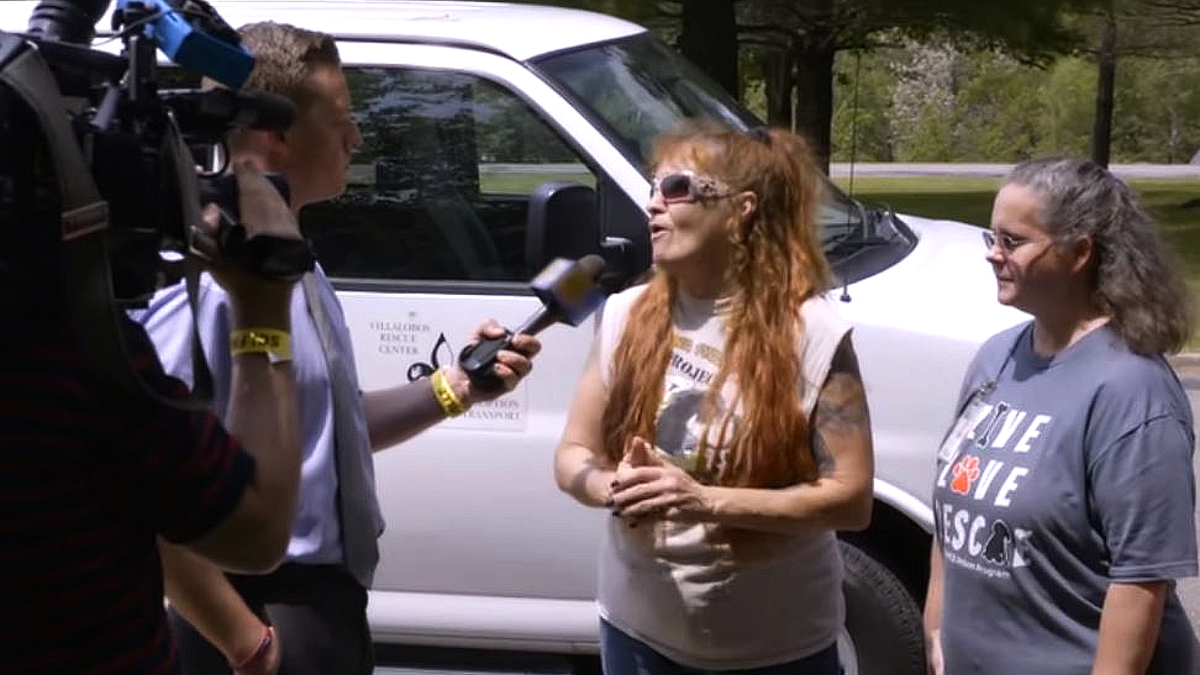 On the next episode of Animal Planet’s Pit Bulls & Parolees, Toney and Earl will rescue an aggressive dog found tied up in front of an abandoned home.  And Tia and Lizzy escort a pit bull to its potential forever home in New Jersey. Tia’s daughter Mariah will also help a deserted canine struggling with neurological issues.

But it is the Pennsylvania prison that takes in 22 of Tia’s hardest to place dogs that will have you in tears.

Watch our clip below as Tia gets emotional as 22 of her hardest to adopt dogs from the Villalobos Rescue Center get new foster homes in prison as a part of the DAWGS Prison Program to pair shelter dogs with inmates.

DAWGS is a nonprofit program that rescues dogs and pairs them with inmates who then teach them obedience was featured on the Animal Planet series.

What happens on Pit Bulls & Parolees

Our clip is a road trip of sorts as Tia, the two Mariahs plus Earl head to Pennsylvania to place 22 of Villalobos Rescue Center’s hardest to place dogs with some prisoners for a four week foster program. The end result is to get these dogs conditioned for a family and forever home while giving the inmates actual marketable skills when they return as citizens who paid their dues.

Tia unloads the dogs with the help of her team.  She says: “When we first pulled up I was just astounded at the amount of volunteers that they already had there to help us take care of the dogs.”

The dogs are all labeled and with paperwork, and the natures of their personalities are spelled out to the letter.

Noting this, Tia says: “This is the most organized we’ve ever had for medical records.”

Amy from DAWGS Prison Program says: “We’re taking dogs from high kill shelters overwhelmed [with] rescues in the south and pairing them up with inmates to get them into forever homes, you know a lot of these dogs come from really hard backgrounds and we can place them into phenomenal families… ”

Tia asks her: “So you adopt our dogs as they get homes?”  Amy explains that the one big group is fostered and hopefully it is done in four weeks, so then they get those dogs adopted at that point.

Amy adds: “And if they do, great [and] if not then they’ll stay here until they’re adopted.  We’re thrilled to get dogs homes and that’s what our whole goal…it’s really a win-win for everybody. The prisoners win because they get valuable life experience and when they get out they have a great skill set to then go into possibly boarding situations [or as] dog trainers,  groomers you know sky’s the limit.  The dogs of course are the ultimate winners because their their lives were on the line, you know, so now they’re getting a second chance at life and a new family.”

Teary, Tia says: “Every prison in this country needs a program like this, I like to get emotional but like it’s saving us right now, this program…it is saving us. We are drowning in dogs and if Amy hadn’t contacted me and if we hadn’t been invited here by these prisons, I don’t know what we would have done.”

The emotional clip builds as Tia notes that in the south, the work for rescues is extra hard. She is hopeful that they can create a pipeline of these hard to foster dogs with the prisons so that they are not put down.

In the clip we see that the dogs they brought to this prison are running happily in the yard, and the men assigned to them are thrilled to have a buddy to make them forget they are in prison for a spell.

But they also know they have a responsibility to the dog to help that animal become accustomed to human interaction.

Tia Torres and her family own and run Villalobos Rescue Center, the largest pit bull rescue center in the country, where she works tirelessly to dismantle the unfair stereotypes placed on pit bulls and other large breed dogs which are hard to place.

Together they work hard to rescue, rehabilitate and rehome these unwanted dogs that have been discarded, demonized and abused due to the reputation of their behavioral issues and breed.

And after nearly 30 years in rescue, Tia thinks she has seen it all – but her new home in New Orleans has a whole new set of challenges.

In addition to watching the show on Animal Planet, viewers can stream episodes of PIT BULLS & PAROLEES on the Animal Planet GO app. They can join the conversation on social media by using the hashtag #PitBullsandParolees and follow Animal Planet on Facebook, Twitter and Instagram.

‘Seeking Sister Wife:’ Fans Are Behind Dannielle Merrifield All The Way On IG
Is Kim Kardashian Riding Kylie Jenner’s Coat Tails?! Copies Rebrand Plan
Val Chmerkovskiy Gets Candid On “Stripping Down” On Tour
Farrah Abraham: Concern Mounts For Sophia Following Bizarre Video, Does She Need Help?
Love In The Afternoon With Hallmark’s ‘A Little Daytime Drama’