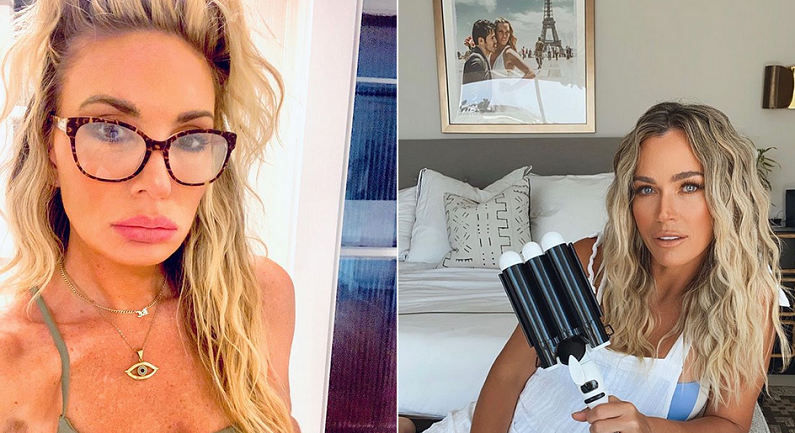 Below Deck alum Kate Chastain reignited her feud with Teddi Mellencamp. But most Bravo fans didn’t even know that the two had beef with each other. It’s a “you had to be there” situation.

Kate first threw shade at the RHOBH co-star in May 2019. It all started when Teddi talked about the downfalls of juggling a business with motherhood. Then the blunt Bravo reality star grimaced over Teddi’s quote on Twitter.

During BravoCon, Andy Cohen attempted to get Bravo stars to “squash” their “beef” with each other. He had Teddi and Kate in the hot seat. Ironically both ladies wore similar sequin dresses. Kate didn’t want to argue with the then-pregnant reality star so she let things slide.

But now Kate threw shade at Teddi again and fans are confused.

The Below Deck alum took to Twitter to throw shade at Teddi Mellencamp. The accountability coach has come under fire for running an unhealthy diet and fitness regimen through her All In By Teddi program. Several of her former clients have come forward to reveal that the program was so extreme that they were allowed to consume only 500 calories per day.

“You know that saying ‘I hate to say I told you so’ Well i don’t hate saying,” Kate tweeted along with a photo from BravoCon. “I actually really enjoy it.”

Fan account @bravohistorian posted Kate’s tweet along with the clips from last year’s BravoCon. But fans were confused over Kate and Teddi’s alleged feud. Most of them didn’t understand the context of the tweet and the clips.

“Did I miss something?” one follower wrote.

“Why do I feel like I just woke up from a super disorienting nap after watching this?” another fan chimed in.

Other fans were divided. Some applauded Kate for standing up to Teddi, who they feel is too “boring” for reality TV. Others slammed Kate for being rude to the RHOBH co-star.

Here’s a run-down of Kate and Teddi’s encounter at BravoCon. Kate recalled their encounter on the Watch What Crappens podcast last year. She hoped that Andy had forgotten about their feud by then. She clearly didn’t want to be called on stage.

“But then they are like, ‘Up next Kate and Teddi?” she explained. “And then she was like five months pregnant. And you can’t argue iwth a pregnant woman. So then I announced that I was pregnant. Which is like, maybe? I’ve been dating a lot.”

Kate simply congratulated Teddi and said she’ll be “held accountable for all my tweets.” Then she backtracked and joked that she doesn’t “need an accountability coach because I’m pretty fit.”

Kate claims Teddi changed because of the reality show

The former yachtie had nothing good to say about Teddi Mellencamp in the past. This wasn’t the first time that she threw shade at the fitness lover on Twitter.

“Im still not really sure what exactly an ‘accountability coach’ does, but I’m pretty certain it doesn’t require more time away one’s children than any other job the millions of working mothers have,” Kate previously tweeted.

Im still not really sure what exactly an “accountability coach” does, but I’m pretty certain it doesn’t require more time away one’s children than any other job the millions of working mothers have. #RHOBH

On the Reality Life with Kasey podcast, Kate revealed that Teddi’s attitude changed between her first and second season of The Real Housewives of Beverly Hills. The former chief stew feels that most people who star on their first season of Below Deck are more authentic. Then, once they return for a second season, they decide to change their character “and really turn it up a notch.”

“I think that Teddi, after her first season, has completely changed,” Kate said. “But now she’s become a Stepford Wife. She’s dressing just like them. I jut wish she would have stayed more true to who she was.”

It’s safe to say that Kate and Teddi won’t become friends anytime soon. Whose side are you on in this feud? Sound off below in the comments section.

‘The Boys’: What’s In Store For Homelander Next Season?
Did Kelly Dodd Test Positive For Coronavirus After Her Wedding?
‘LIVE With Kelly and Ryan’: Kelly Hosts Professionally With Ryan Seacrest Away
Could Lauren Duggar Be Hiding A Pregnancy?
Taryn Manning And The ‘DWTS’ Staff Face Off