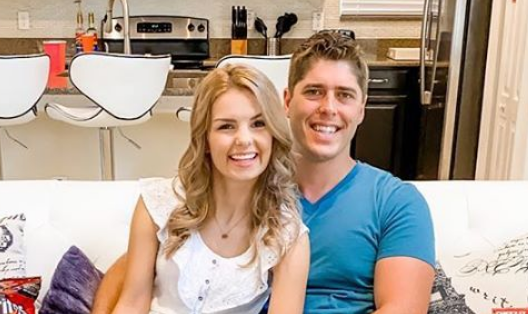 Bringing Up Bates stars Alyssa Bates and John Webster have announced their baby’s name! The couple made this big reveal on their YouTube channel on Friday.

John and Alyssa have three daughters, Zoey Joy, 2, Lexi Mae, 3½, and Allie Jane, 5. Their fourth baby is a girl too and is due on February 17, 2021. They shared this exciting news in August and announced the baby’s gender shortly after. Due to the coronavirus, they did a live gender reveal on their YouTube channel.

In the first part of their video, John and Alyssa are working on their YouTube intro clip. The couple posts frequent updates on YouTube, so they thought it was time to update the intro. They give viewers a behind-the-scenes look as they shoot the new intro.

First, the couple shares how they get their daughters ready to film the new intro. A lot of work goes into getting the three little ones all dressed and ready to go.

Then, Alyssa gives fans a peek at the videographers getting shots of the girls. Alyssa and the three girls are all wearing white lace dresses.

While at the location where they are filming the intro, Alyssa Bates and John Webster ask their daughters what they should name the baby. Zoe wants to name the baby “baby girl.” Allie says she would like to name the baby Willow after her favorite person in her class. But, Alyssa points out that there’s already a Willow in the family. Her sister Josie Balka has a daughter named Willow. Finally, Lexi weighs in and requests that they name the baby Angelina.

Jokingly, Alyssa says that she and John should stick to naming the baby.

In the video, they don’t clarify how Macy is spelled.

In response to the video, their followers are talking about how well the name fits with the older girls’ names too.

You can see the whole video here.

So, what do you think of John and Alyssa’s baby’s name? Share your thoughts below.