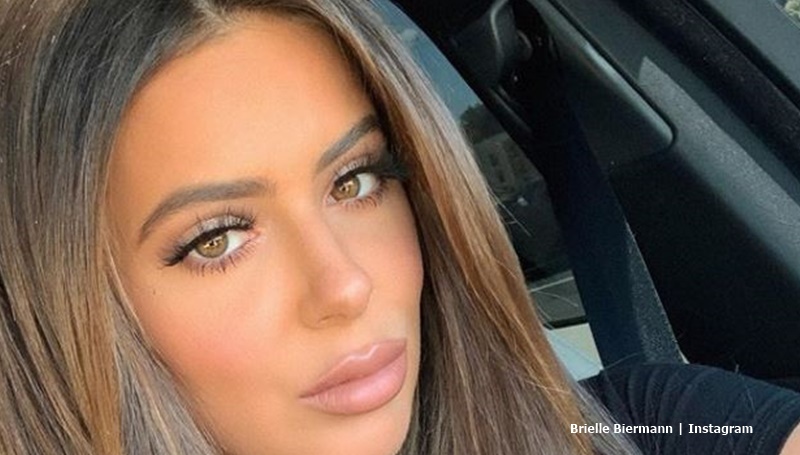 Brielle Biermann, as most Bravo fans know, is the step-daughter of Kroy. Brielle and her mom Kim Zolciak went to the Bones steakhouse in Atlanta with Kroy, to celebrate his birthday. Now, an innocent family photo got twisted into something very ugly as filthy-minded fans imagined the worst.

Brielle and Kim, associated with Don’t Be Tardy and Real Housewives of Atlanta, sometimes get rather scathing with other TV celebs. But this time, it all got aimed at 23-year-old Brielle. The filthy-minded comments came on Brielle’s Instagram. There, she shared two photos taken on the weekend. In one, she and Kroy featured. Meanwhile, in the other, so did her mom Kim.

But, as they squeezed into the photo, Brielle sat at the table on her stepdad’s lap. Brielle’s caption talked about the fun time they enjoyed celebrating Kroy’s birthday. But, things got nasty as one fan thought she maybe “hooked up” with her stepdad. Later, they said they “joked,” after loyal fans slammed them for suggesting that. But, another Brielle Biermann critic also raised questions.

Loyal fans got totally angry when another critic wrote, “why you sitting on your momma husband lap?🤔” Slapping back, some of Brielle’s fans felt furious. After all, they know that Kroy’s been a wonderful dad to her and Ariana. Plus, US Weekly noted that he and Kim also have the younger kids, “KJ, 9, son Kash, 8, and twins Kaia and Kane, 6.” Decent fans know she adores her dad.

As one fan said, “It’s a sick assumption you’re making about a photo of a grown kid raised by a great dad on his birthday but, I suppose some people are sick.” Another Brielle Bierman fan said, “@briellebiermann girl don’t even respond to such stupidity!! People need help!! ❤️Y’all.”

But, Brielle chose to put people right. She responded by writing, “Honestly bc i had no where else to sit. we were making jokes the whole time about him being Santa it was comedy.”

HAPPY BIRTHDAY to the most amazing father & man I’ll ever know. I couldn’t imagine a life without your hardworking, selfless, loving, caring self! I’m so proud of you and all you’ve accomplished 🤍 we had too much fun last night i forgot to post yesterday 🖤 love love you dad!

Those people who follow the family celebrate because Brielle found a nice father-figure. One commented, “Y’all won the lottery with this guy! He’s such a great dad to you ALL!” Brielle also responded to that comment, saying, “he absolutely is !!” Meanwhile, others commented on Kroy’s “integrity.” The former pro-footballer married Kim in 2o11. And in 2013, he adopted Ariana and her sister Brielle.

Most of Brielle Biermann’s fans agree that filthy-minded people just tried to make something ugly out of an innocent family moment. But, as one person pointed out, “2020” brought so much pain and ugliness, maybe it’s not done with us yet.

What do you think? Did that photo strike you as something dirty? Or is it just a photo of a family enjoying their time together? Sound off in the comments below.