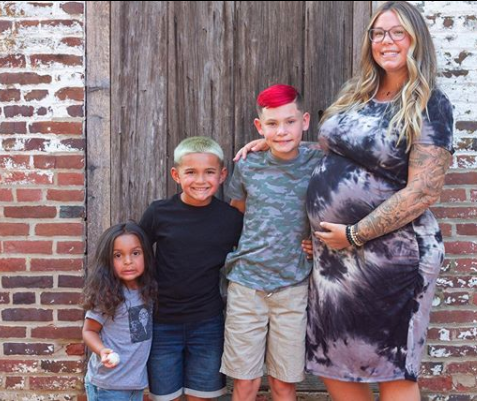 Kailyn Lowry got a reading

During an episode of the MTV reality TV series Teen Mom 2 Kailyn Lowry received a reading from Monica. Monica the Medium was on the show as a special guest for Kailyn’s podcast, Coffee Convos.

Monica started out asking Kailyn if she had children, which of course she replied yes to. She continued her reading saying, “I was getting a three connection here, but I do get four so I do feel like there might be one more child for you. Do you really want a girl?” After Kailyn said yes she wanted a girl, Monica said,  “I hate to say this, but it might be a boy again.”

Kailyn Lowry of course did not believe there was any way she was having another boy let along getting pregnant so soon. She even added, “I guess you have to have a significant other right? Also, not true, but.”

According to InTouch Weekly, as the above episode aired Kailyn tweeted that she was pregnant at the time but did not know it! This new baby was going to be Kailyn’s fourth child and second with Chris Lopez. The pair welcomed their son Romello Creed on July 30, 2020.

• ONE MONTH • it’s so insane how we carry these little humans for 9+ months – we don’t even know them or their personalities yet & they come into our lives & we instantly love them so hard & can’t picture how we ever lived without them. It’s been a full month of sleepless nights, some crying myself 🥴, it’s been a month watching my other boys become big brothers again and trying to get into a routine with FOUR babies. But it’s been a whole month of loving this tiny babe 🖤 #Mello

Will this be Kailyn’s last baby?

Ever since giving birth to her latest son Kailyn has been fairly open on her Instagram. She has shared a lot on the struggles of being a single mother of four and has received plenty of backlash. But, even with all the hate her family receives she is still open to having more kids.

According to US Weekly, Kailyn made a joke saying she probably needs some sort of professional help. This is because there simply is no other explanation for why she would be thinking about having another baby so soon after giving birth.

She went on to say, “It’s the pregnancy that’s so hard! I’m 28 and I know people are older now and they’re having babies, but my body is not the same as it was when I was 16. The pregnancy towards the end was so difficult and I was just so ready to not be pregnant.”

What do you think of Monica predicting Kailyn Lowry’s pregnancy? And do you think Kailyn will actually have a baby no. 5? Let us know what you think in the comments below. Be sure to watch new episodes of Teen Mom 2 on MTV Tuesdays at 8 p.m. ET.